One of the most blatant examples of producer Lawrence Wright’s bias in dredging up discredited and unreliable sources in his “Going Clear” book to attack the Church of Scientology is a source so lacking in credibility that Wright won’t even tell readers his name. There’s only one reason for that—he knows that by disclosing that his mystery man is actually disgraced attorney Graham E. Berry, it would unravel his charade of portraying unreliable liars as credible, trustworthy sources on Scientology and its leader. Berry was even suspended by the Bar for 18 months stemming from his anti-Scientology legal jihad. He was ordered to undergo mandatory psychiatric treatment and can no longer sue the Church.

Wright begins his shell game on page 309 of his book by stating that “Both [Michael] Pattinson and his attorney say they were driven into bankruptcy.” Wright omits that Pattinson was a plaintiff whose mission was to get the Church to somehow change his sexual orientation. His attorney was Graham E. Berry who was attempting to build a cottage industry shaking down the Church through lawsuits. Except that his money making scheme flopped each and every time when courts ruled against him, resulting in sanctions and disciplinary proceedings. Today, with his legal practice in shambles, he spends his time hanging out with anti-Scientologists and posting on the Internet lies about the Church and its leader.

All of this information was available to Wright before he published his book. The fact Wright doesn’t mention Berry’s background anywhere shows he either has no integrity because he knew about it and chose to ignore it, or that his “investigative” skills are seriously lacking. Another of Wright’s discreditable sources, Mike Rinder, knows all about Graham Berry and the facts detailed in this letter. Either he proved himself a reliable source by keeping Berry’s judicially sanctioned misconduct from him, or Wright knew and ignored it. Either way, it was hushed up.

Berry’s sordid history, which is in the public record for anyone to review, includes paying witnesses for evidence, falsifying evidence, writing text into witnesses’ declarations without their consent, harassive litigation tactics, as well as an unstable personal life afflicted with debauchery, substance abuse and psychiatric disorders.

He is typical of the handpicked dregs Wright recruited to disparage the Church of Scientology. As Berry once stated:

My agenda basically is to bite Scientology in the butt and to cause it as much grief as possible.

He even went so far as to accuse the leader of the Scientology religion of murdering the Founder of the religion and his own mother-in-law. Even Wright’s source Mike Rinder just testified that he knew this was a complete fabrication. So you have one of Wright’s sources, Graham Berry, being discredited by another one of his sources, Mike Rinder, who could testify to Berry’s lies. Berry’s outrageously false accusations that the leader of the religion murdered his mother-in-law shreds his credibility, yet Wright ignores it.

Berry did not stop with such outlandish claims. He went on to file frivolous lawsuit after frivolous lawsuit, for which the declarations Berry submitted contained so many wild and unfounded conspiracy theories he was repeatedly reprimanded from the bench. Here’s what one judge said:

Court documents show Berry’s tactics included his paying $17,000 for a known Church attacker to sign an affidavit containing false allegations against the Church and forging testimony by writing another 11 pages into a witness’s court declaration without her knowledge. That’s perjury. Here’s what the witness told the court after she found out: “I gave no authorization for my declaration to be changed after I sent the signed copy of it to Mr. Berry….”

Berry was terminated by his law firm for making misrepresentations in court filings and he hung out his own shingle to resume his attacks on the Church with a series of bizarre conspiracy lawsuits.

The case referred to by Wright was filed by Berry for Pattinson on May 21, 1998. The sprawling, 166-page document named as defendants 66 organizations and individuals spread across several countries, as well as “Does 1 – 500.” Berry alleged the U.S. government was part of an international “conspiracy” to advance Scientology across the world. The suit also claims the Church failed to “cure” the plaintiff of his sexual orientation. (The Church does not view sexual orientation as something it or anyone else “cures.”) In addition to Church entities and the Church leader, the suit included as defendants:


The list of defendants and the bizarre conspiracy alleged should tell you everything you need to know about Berry’s credibility, as well as raise serious questions about the quality of Wright’s other sources. (See Pattinson case caption .)

Berry repeatedly withdrew and re-filed the same case over and over again, each time including rambling dissertations on Berry’s latest conspiracy theories in hopes of generating publicity with each new filing.

When the California State Bar suspended Graham Berry in 2002, the harassing conduct of this case was among the misconduct cited:

The court found that Berry’s three amended complaints failed to state sufficient facts to support a basis for liability and that Berry acted in bad faith. The court further cited Berry’s violation of 28 U.S.C. Section 1927, prohibiting the unreasonable and vexatious multiplication of proceedings and said he violated the Federal Rules of Civil Procedure, Rule 11, requiring attorneys to certify that the paper filed had a legal basis. In July 1999, the court imposed a sanction of $28,484. He has not paid the sanction. (See State Bar findings against Graham Berry as reported in the Los Angeles Daily Journal .)

In the years leading up to the Bar disciplinary proceedings, Berry continued to file and withdraw cases on behalf of himself and clients against Scientology Churches, the Church’s leader and related individuals. In all, Berry was ordered to pay approximately $123,000 in sanctions and attorneys’ fees to Scientologists as a direct result of the frivolous lawsuits he filed. On June 11, 1999, Berry sought unsuccessfully to get out from under these sanctions orders by declaring bankruptcy. However, the bankruptcy court refused to allow Berry to evade payment of these judicial sanctions, finding the misconduct intentional and outside the protection of bankruptcy proceedings.

On August 20, 1999, California State Court Judge Alexander Williams had enough and declared Berry to be a vexatious litigant under California law (which means that the individual has so abused the time and resources of the court that he is forbidden from filing any cases without prior approval of the court). In granting the Church’s petition to declare Berry a vexatious litigant, Judge Williams addressed Berry in open court, stating:

With all due respect, sir, I have to sadly state that if there is such a thing under God’s green earth as a vexatious litigant, you, sir, sadly, are it. (See Hearing transcript and Order .)

Wright also relied on another duplicitous source, Garry Scarff, who is Graham Berry’s client and a self-confessed perjurer. Scarff told Wright a fictitious story about being a Scientologist forced to comply with a bank robbery in order to get a debt paid to the Church. In fact, Scarff never was a Scientologist and there never was such a robbery. The story is a complete fabrication. But it appears in Lawrence Wright’s book as a “fact,” even though there are official records of every bank robbery in the United States and no record exists of this invented crime. Wright also omits that Scarff was never a Scientologist and has a sordid history of attempted deprogramming of members of various religious denominations for his own profit.

In an Affidavit signed on July 5, 1997, Scarff swore under oath:

I have never even been a member of the Church, much less an employee or ‘operative’ for any Church of Scientology. (See Garry Scarff Affidavit .)

According to an interview Wright gave to the Daily Beast of 23 January 2013, “Scientology vs. Lawrence Wright”, his reason for using Scarff as a source was:

“The reason I used Scarff was to enforce the point that people were compromised financially by the church and he was just one of several people with these tragic stories,” explains Wright, who says that he interviewed Scarff in the presence of his attorney. “He told me a lot of other things that I didn’t use, not because I didn’t think they were true, but just because I had too much to say.

What “other things” were omitted? His attorney was Graham Berry. The fact that in 1994, Graham Berry solicited false testimony from Garry Scarff in making allegations against the Church? That in 1997, Scarff recanted and executed a declaration confessing to the lies he had told against the Church? (See Reporter’s Transcript of Hearing and Vexatious Litigant Order .) That Wright omitted these allegations tells HBO all you need to know about Wright’s book.

But that is not all regarding Graham Berry, Wright’s “credible” source. Berry’s own private life reveals a history of extreme depravity including offering a “kid” $200 to defecate on him and engaging in predatory sexual behavior dating back to the New York club scene in the 1980s. One young man stated in court documents:

As mentioned above, when the California State Bar finally caught up with Graham Berry they suspended him for 18 months for harassing litigation tactics and comingling client funds in his trust account. In seeking to evade Bar discipline, Berry claimed that psychiatric problems, alcohol and drug dependency, and treatment for his suicidal tendencies were to blame for his actions. The Bar’s findings included that Berry receive mandatory psychiatric treatment.

Following his Bar suspension, Graham Berry is basically unemployable. While being financially supported by an anti-Scientologist, he acts as an unofficial legal advisor to the cyber-hate group Anonymous and has participated in their hate marches against the Church. He also facilitated the participation of other Wright/Gibney sources—including Marty Rathbun, Marc Headley, Amy Scobee and Jesse Prince—and members of Anonymous at hate rallies against the Church in Hamburg, Germany.

HBO’s viewers have a right to know all the facts about Wright’s sources—especially Berry.

Given that Lawrence Wright is credited as a producer of the film, his egregious use of unreliable sources like Graham Berry and Garry Scarff shows Wright hasn’t an ounce of integrity and certainly no investigatory skills. Either that or he is just a corrupt journalist. 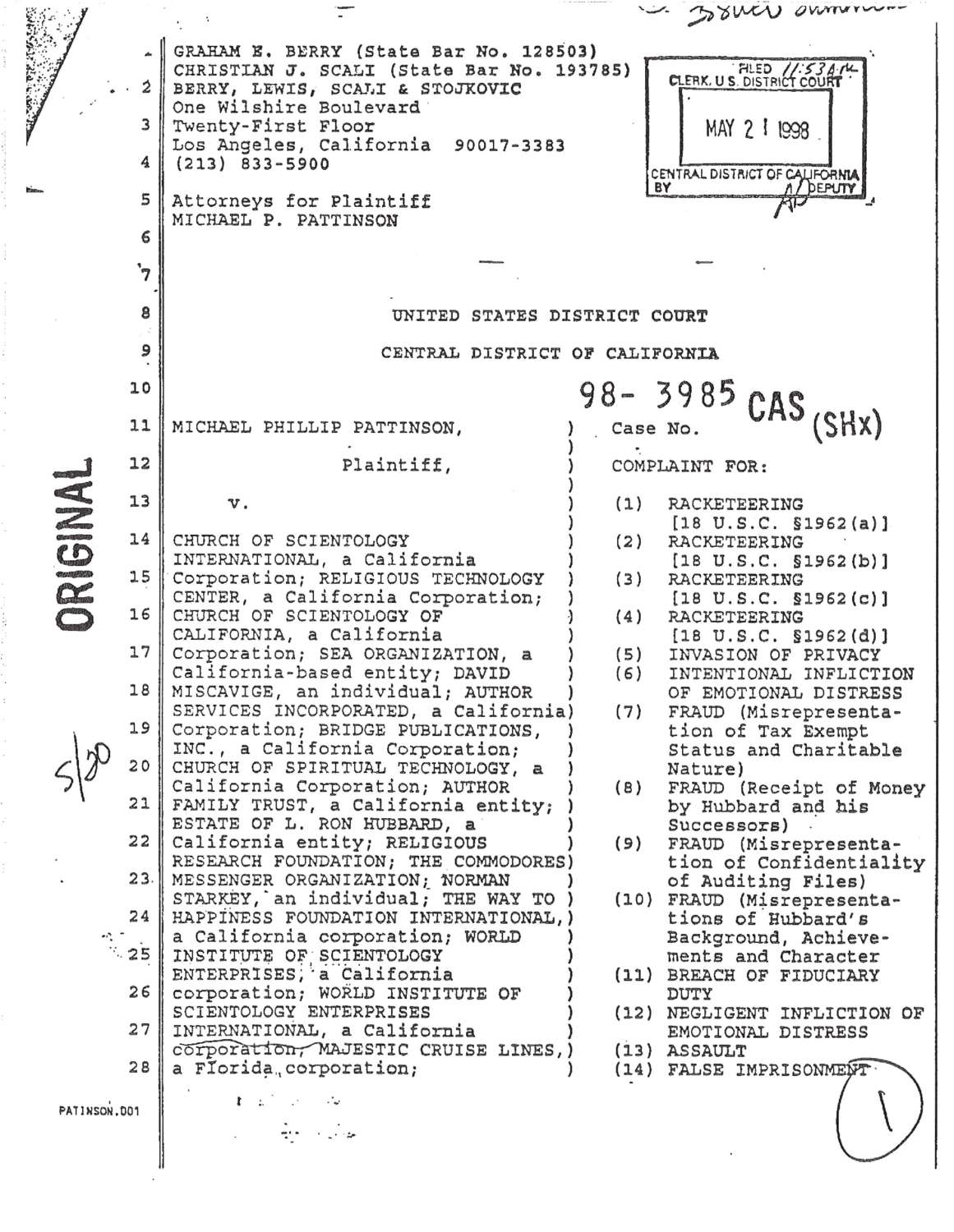 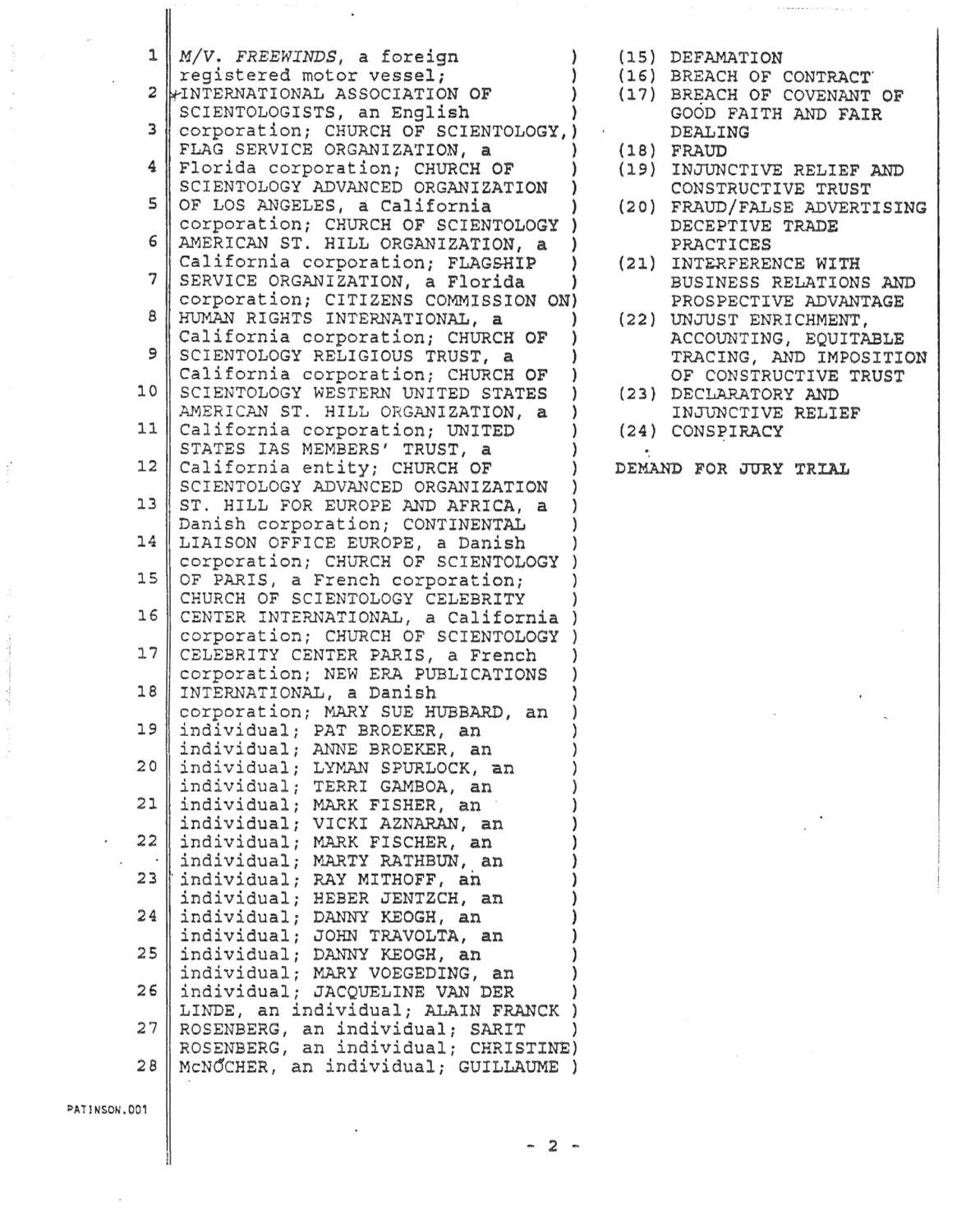 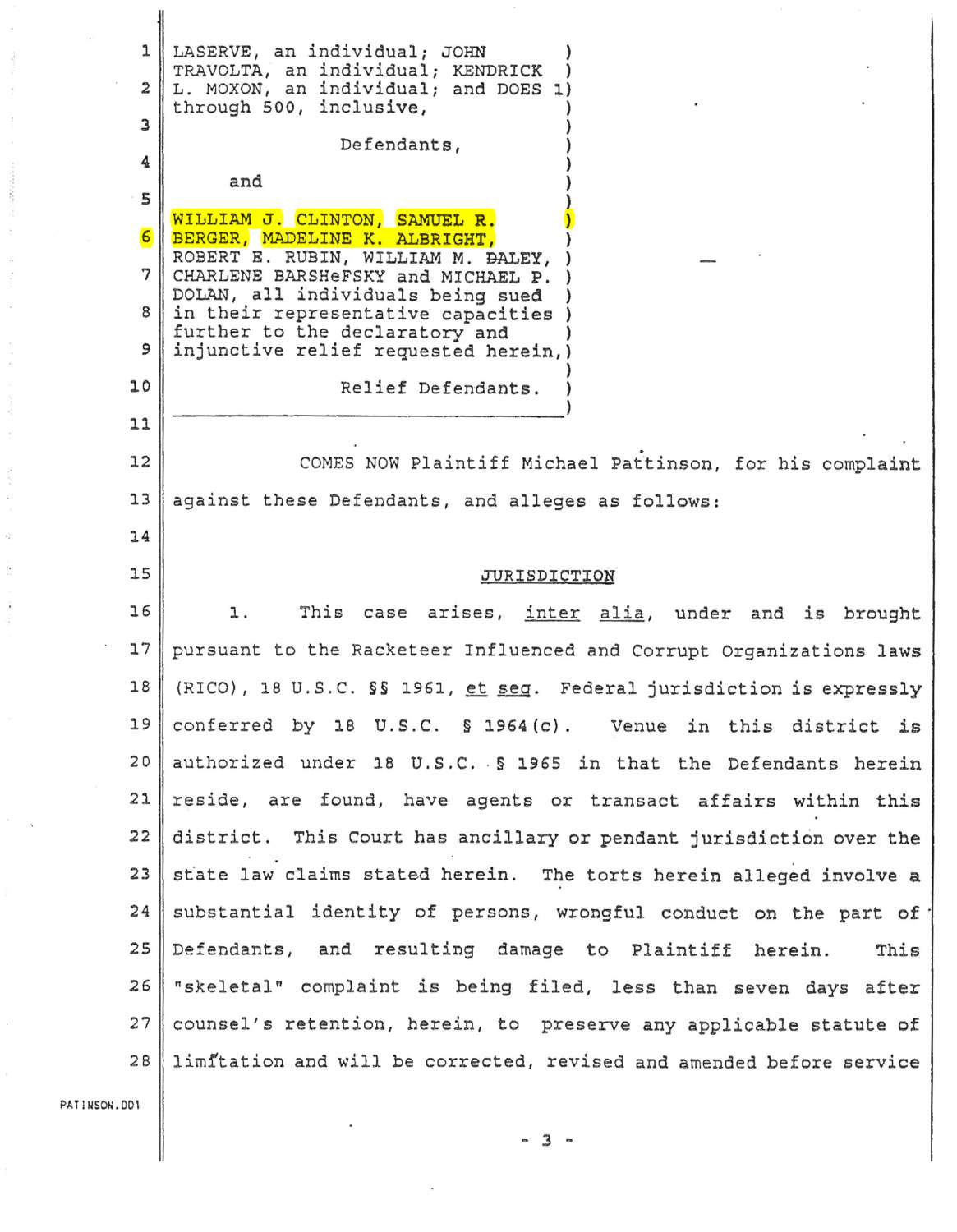 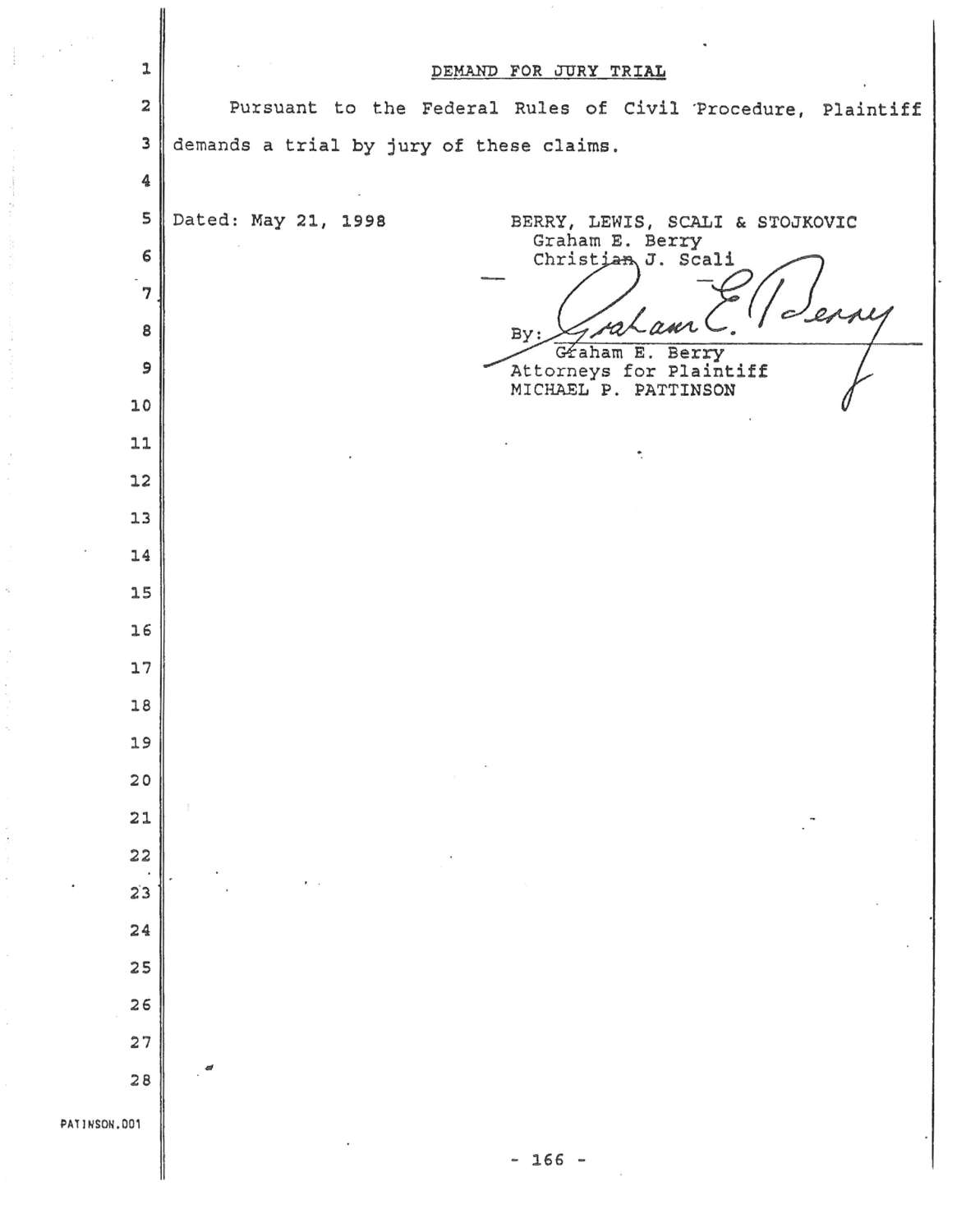 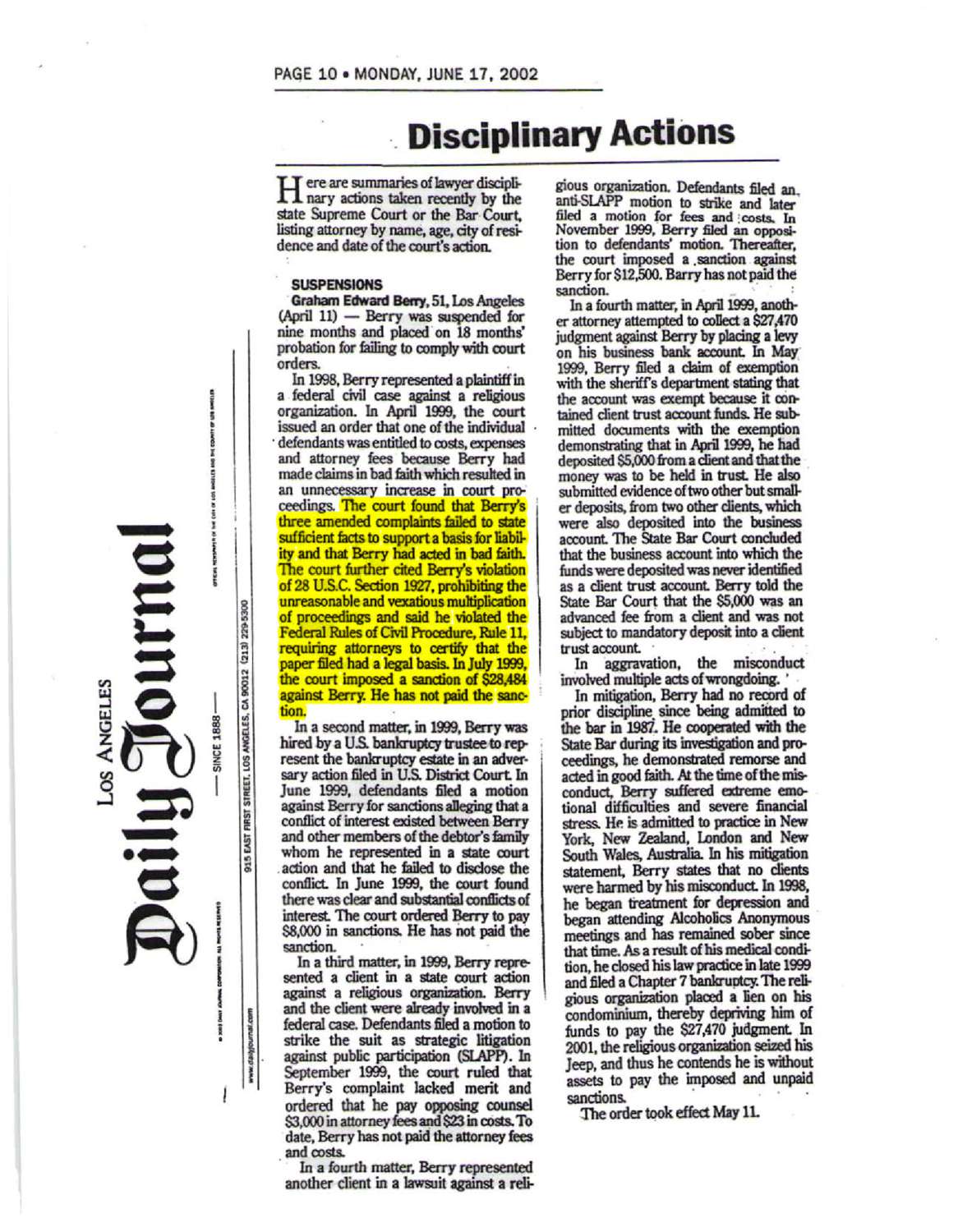 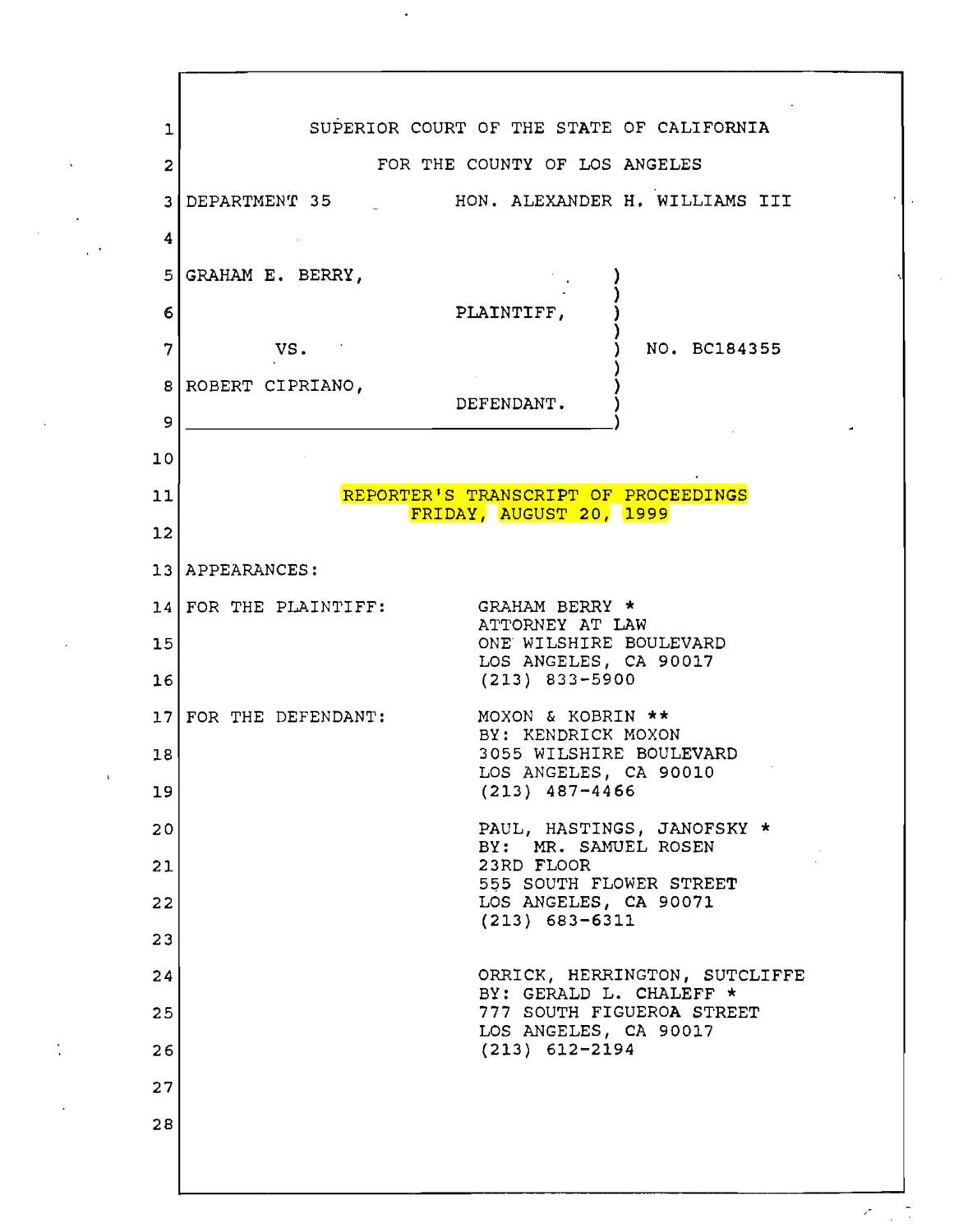 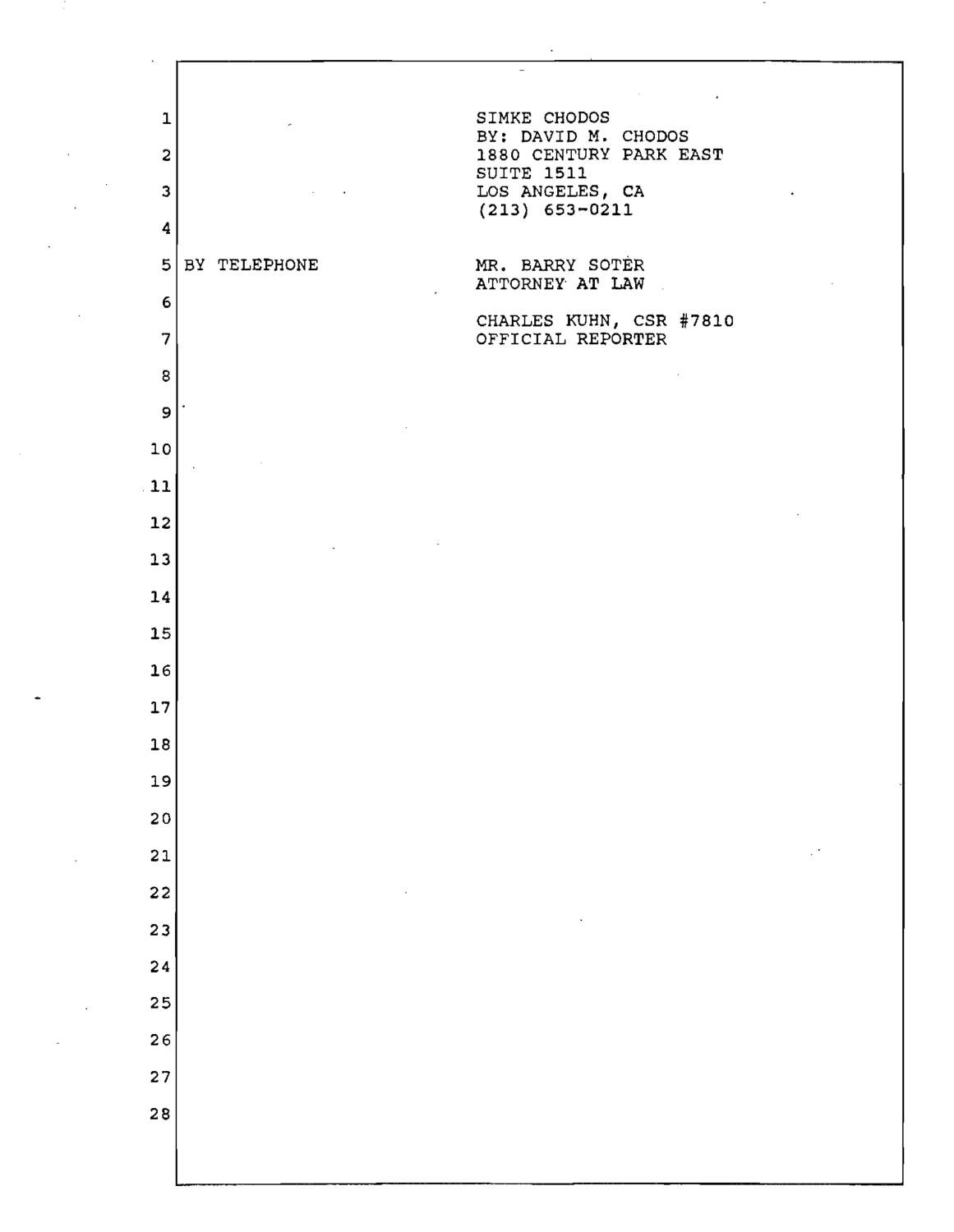 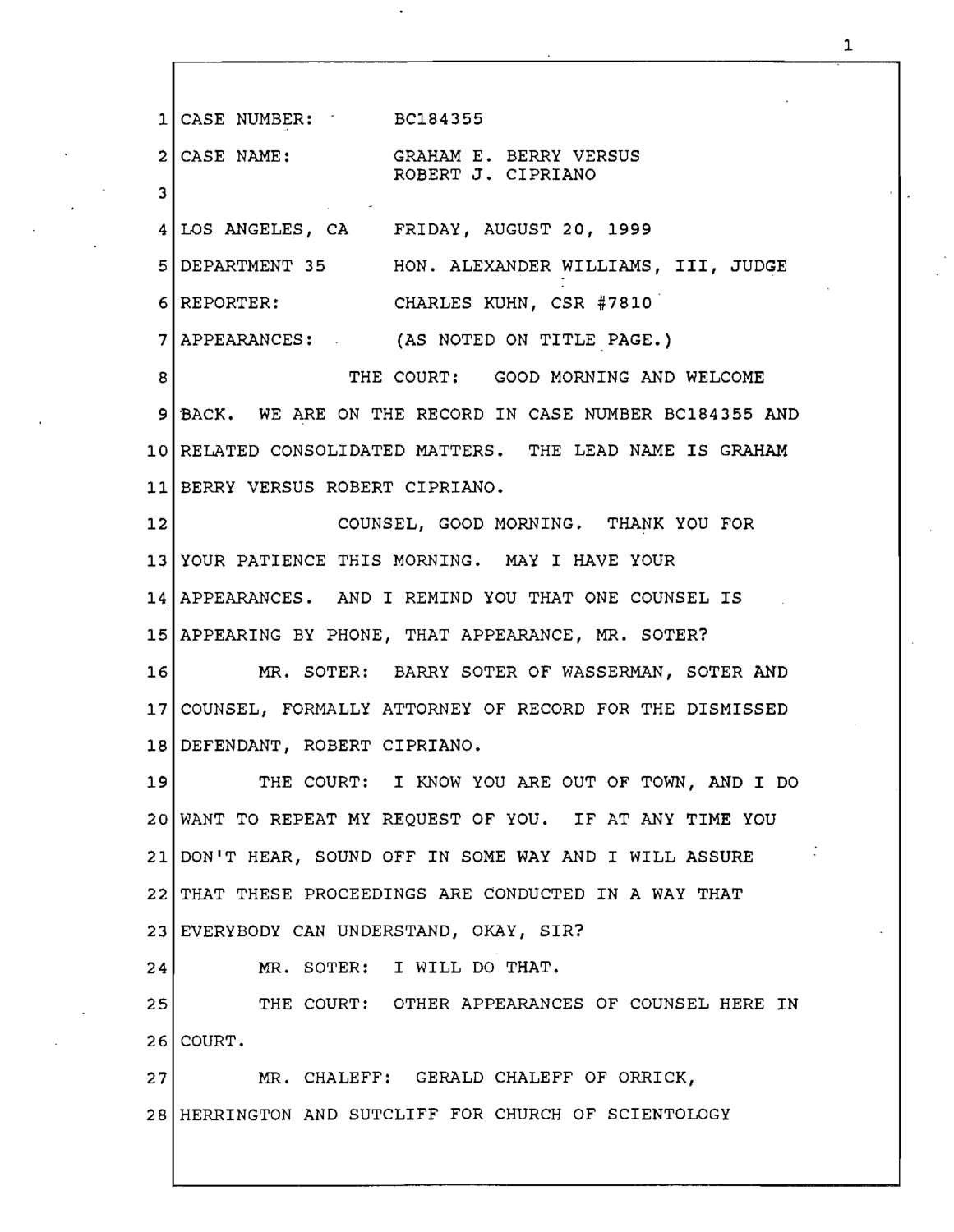 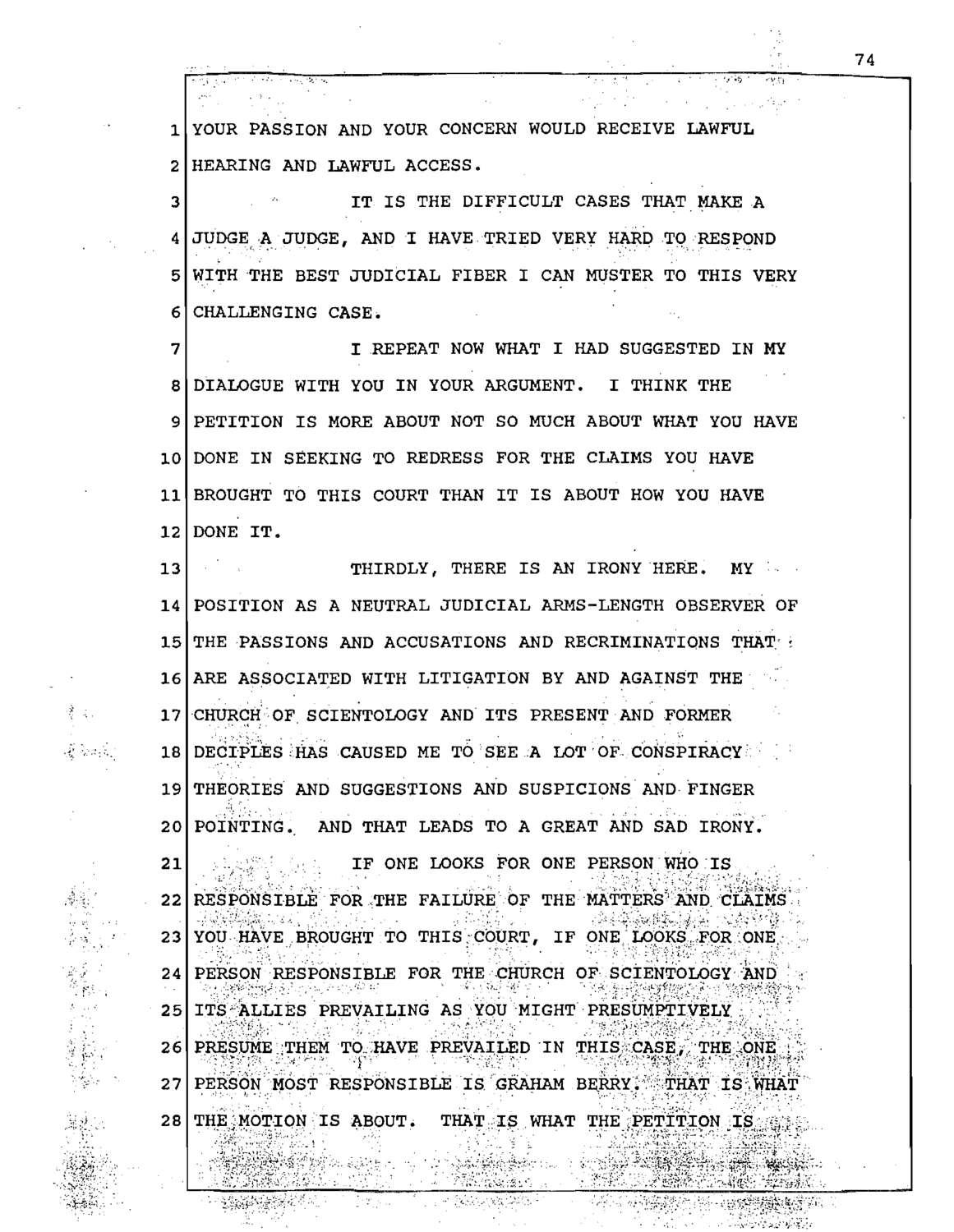 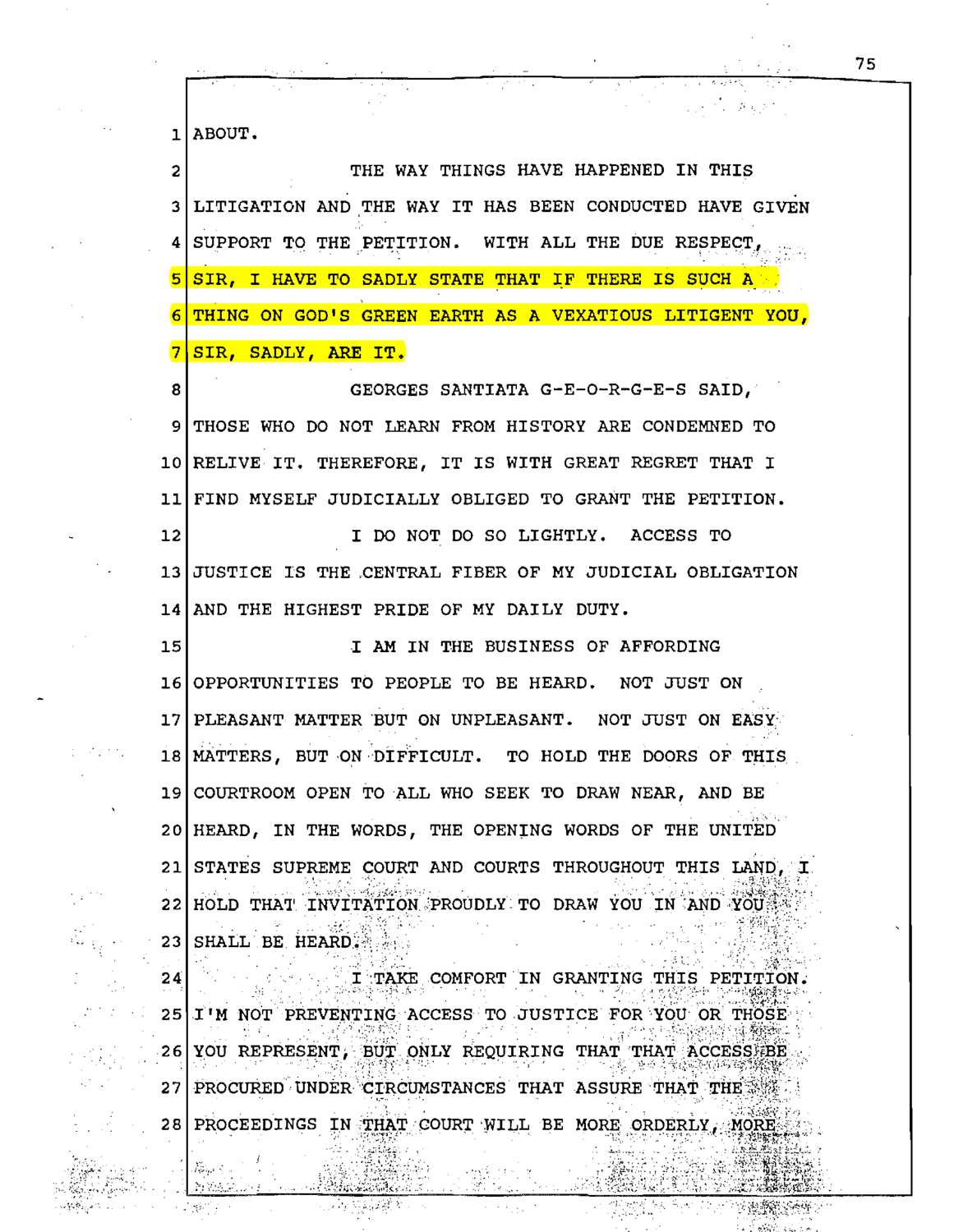 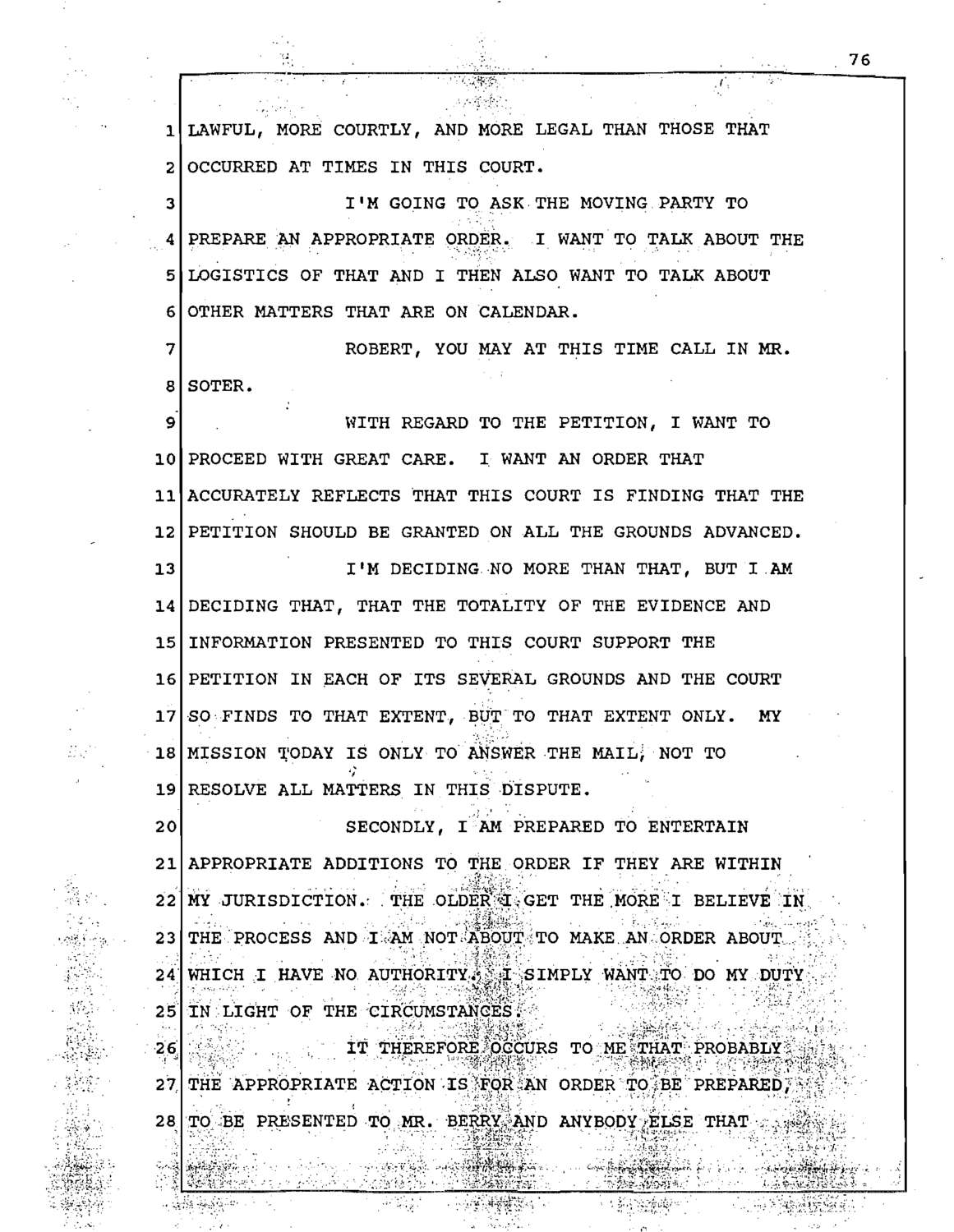 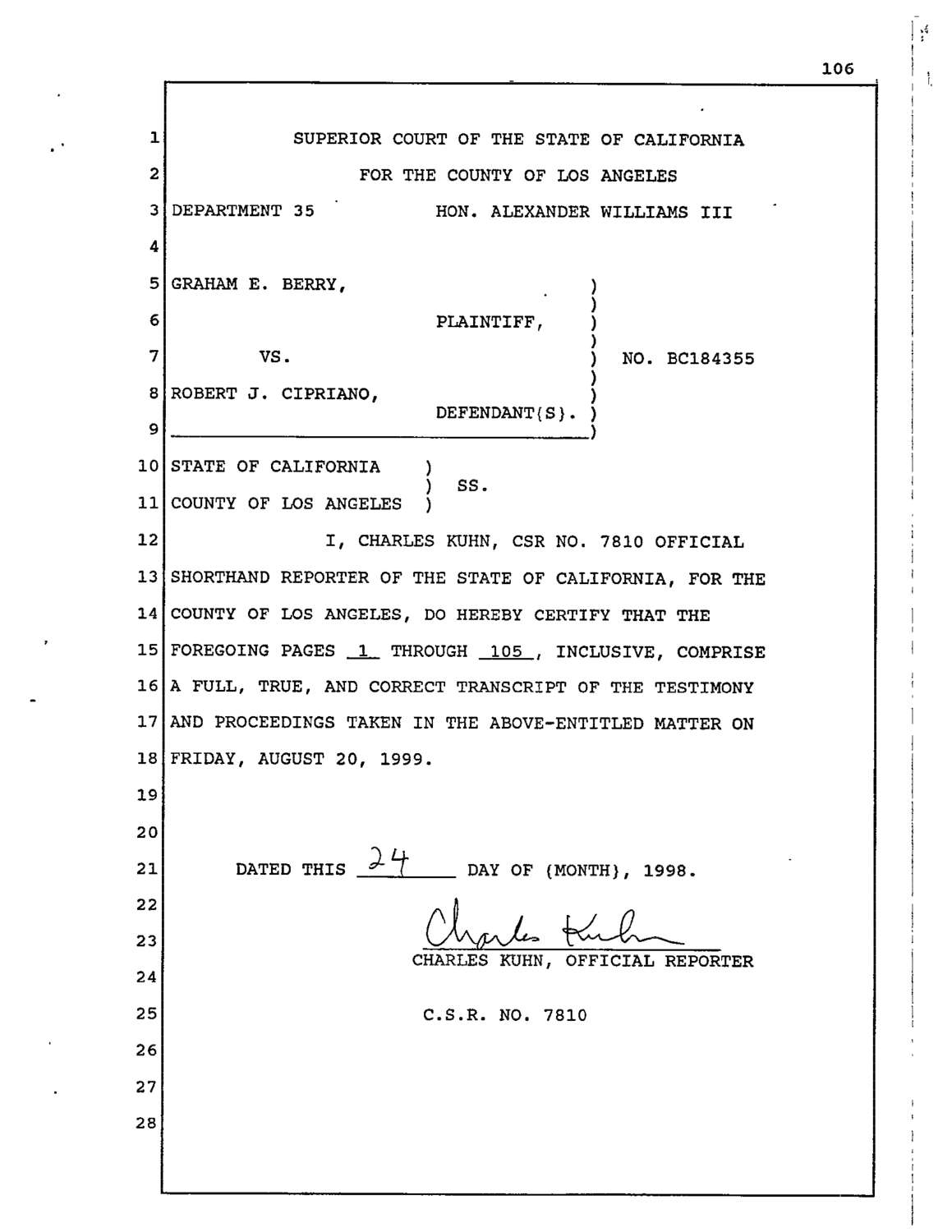 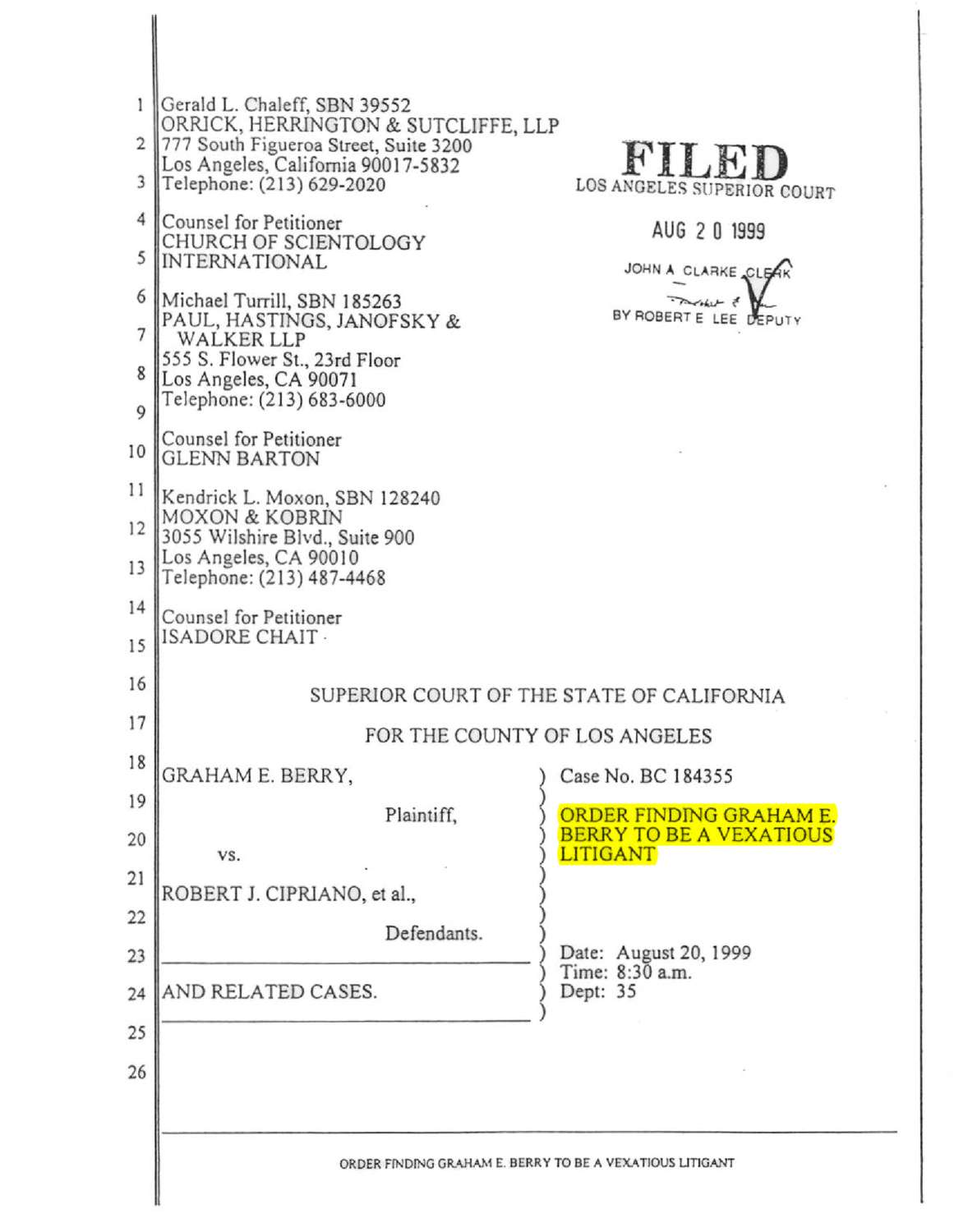 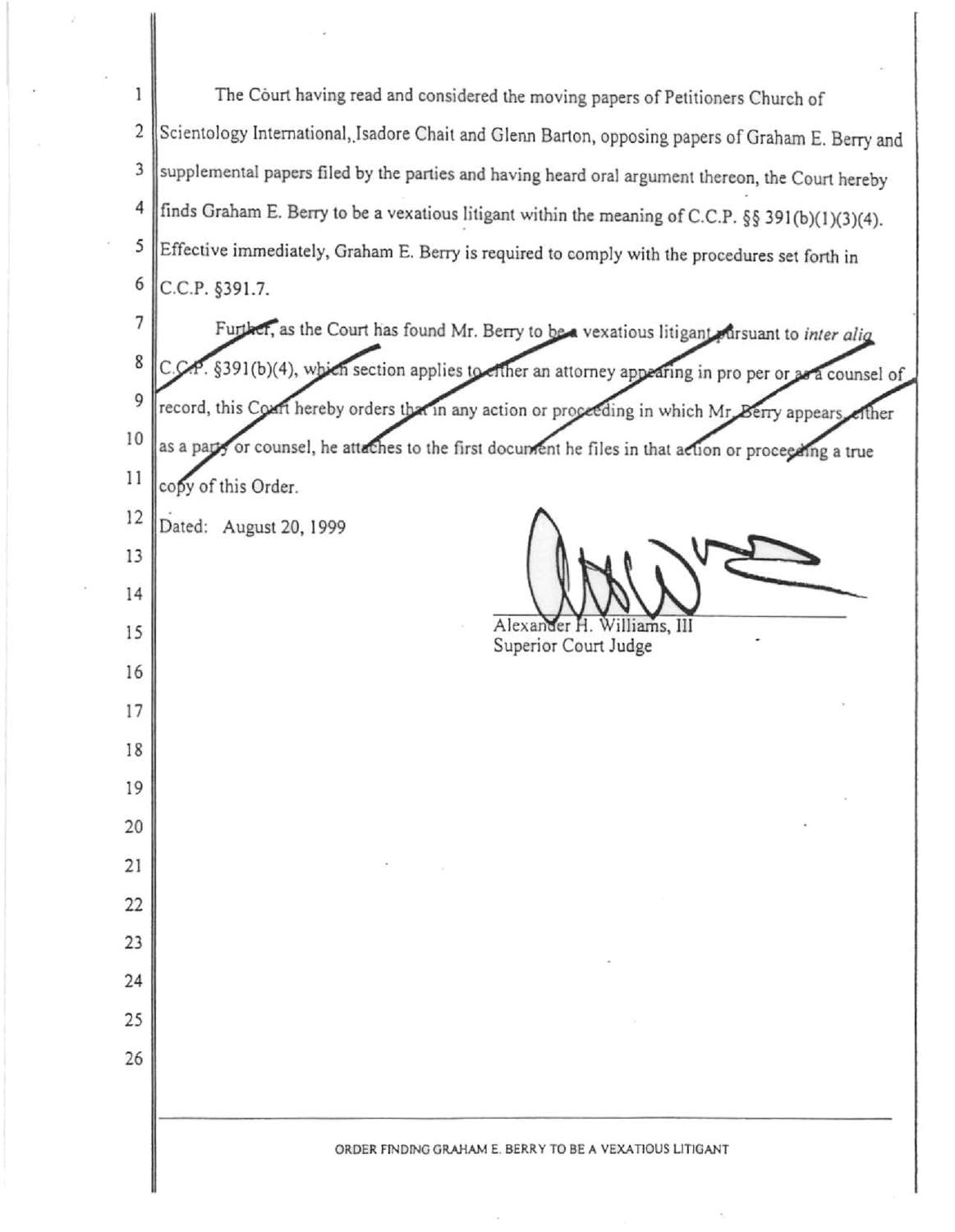 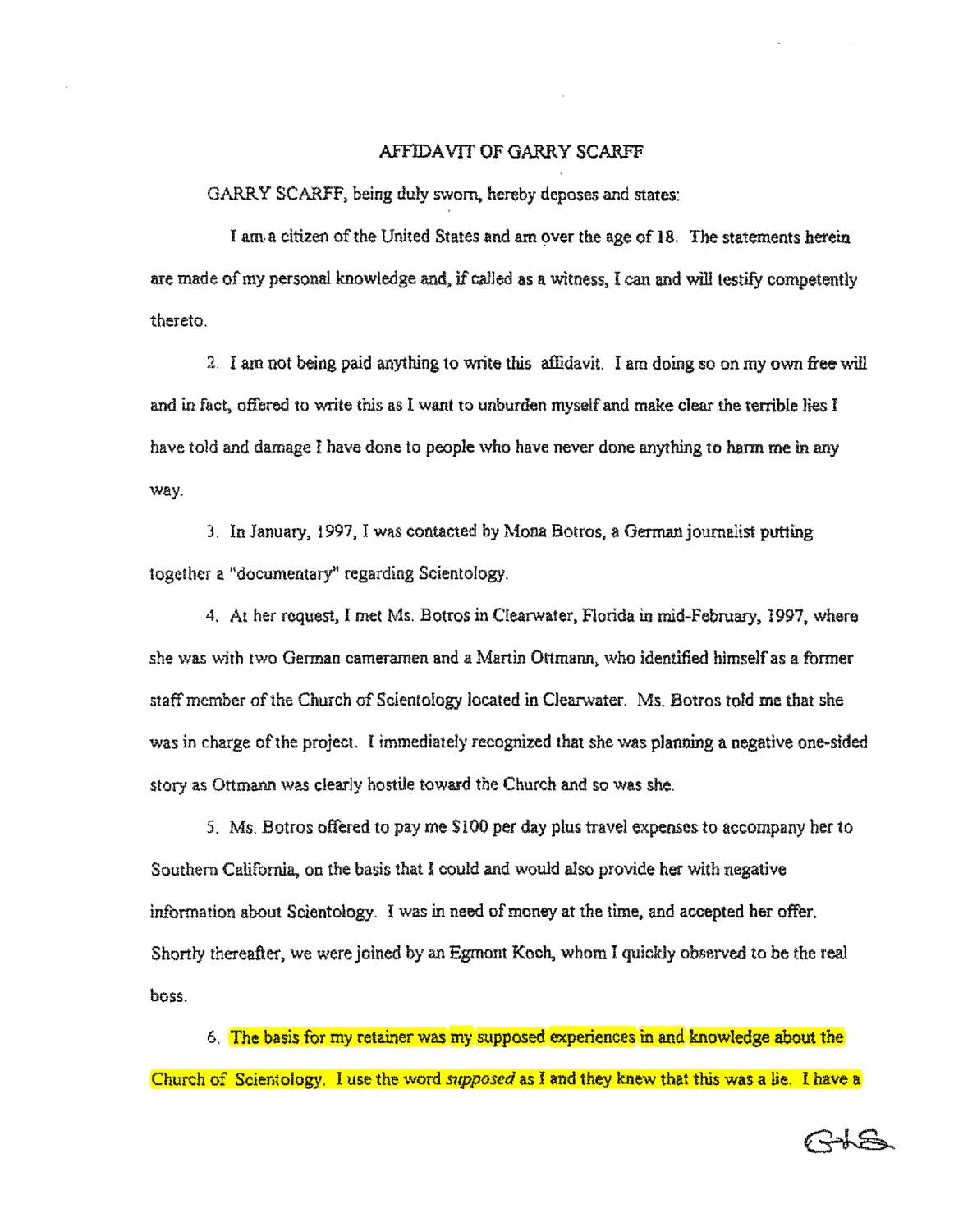 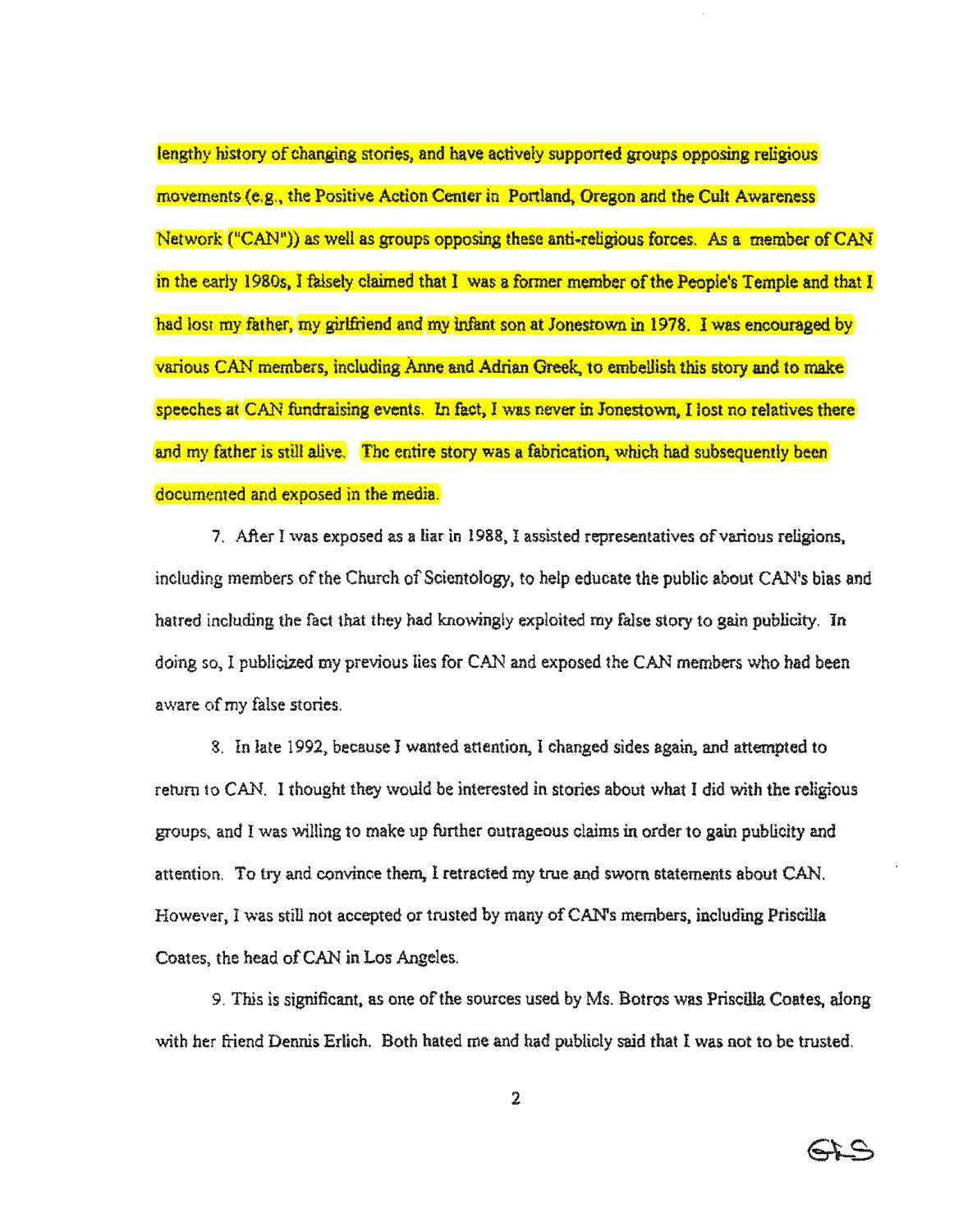 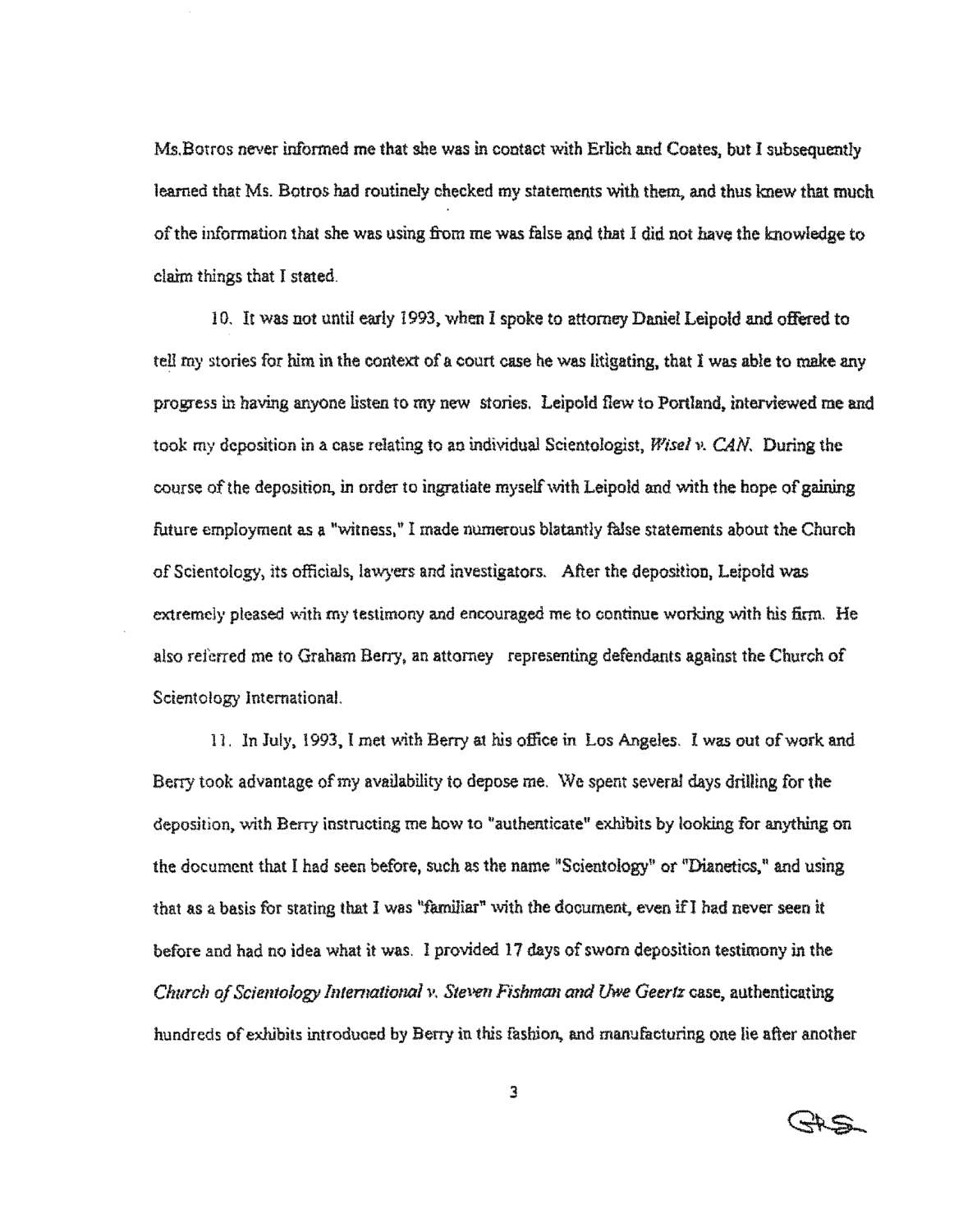 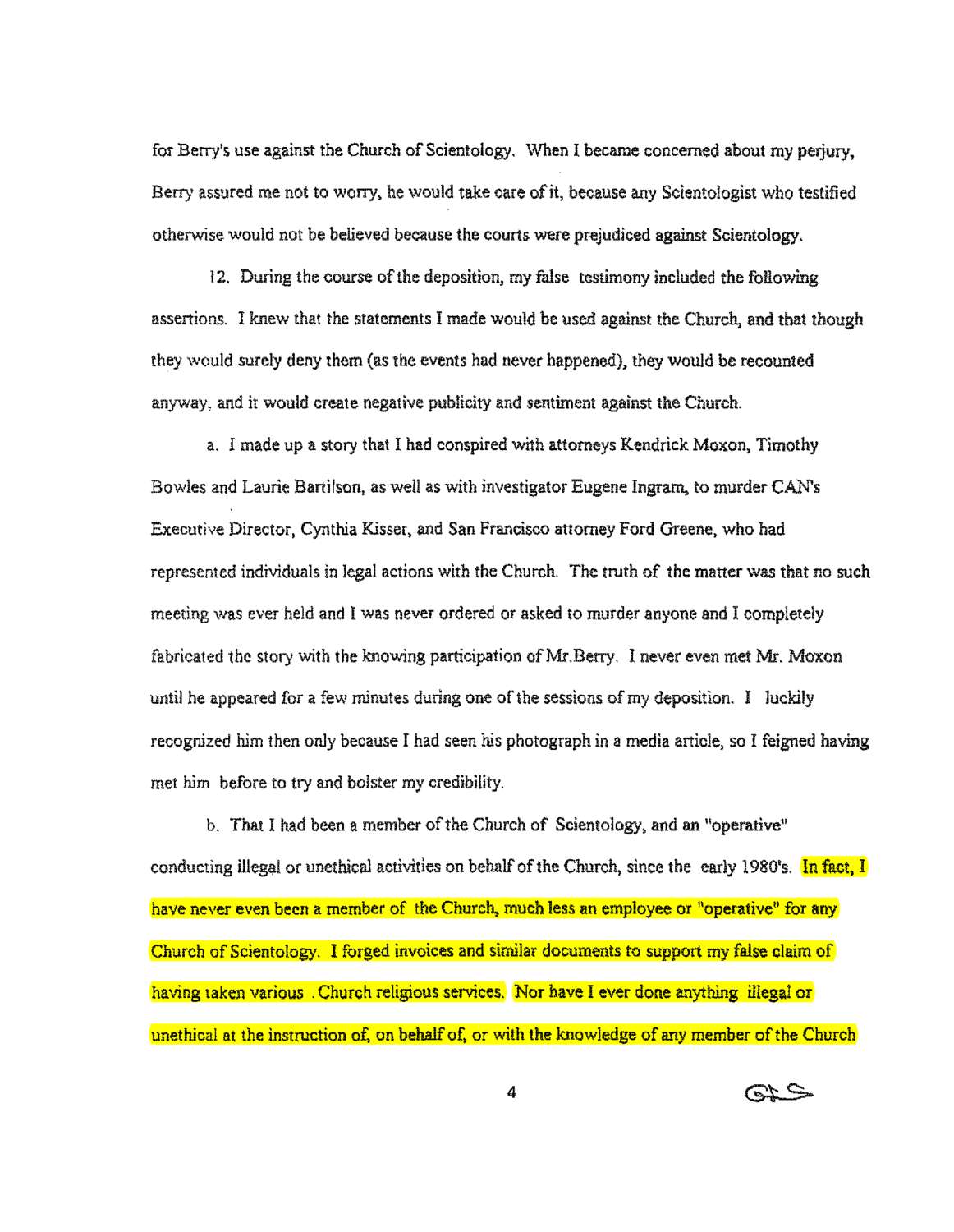 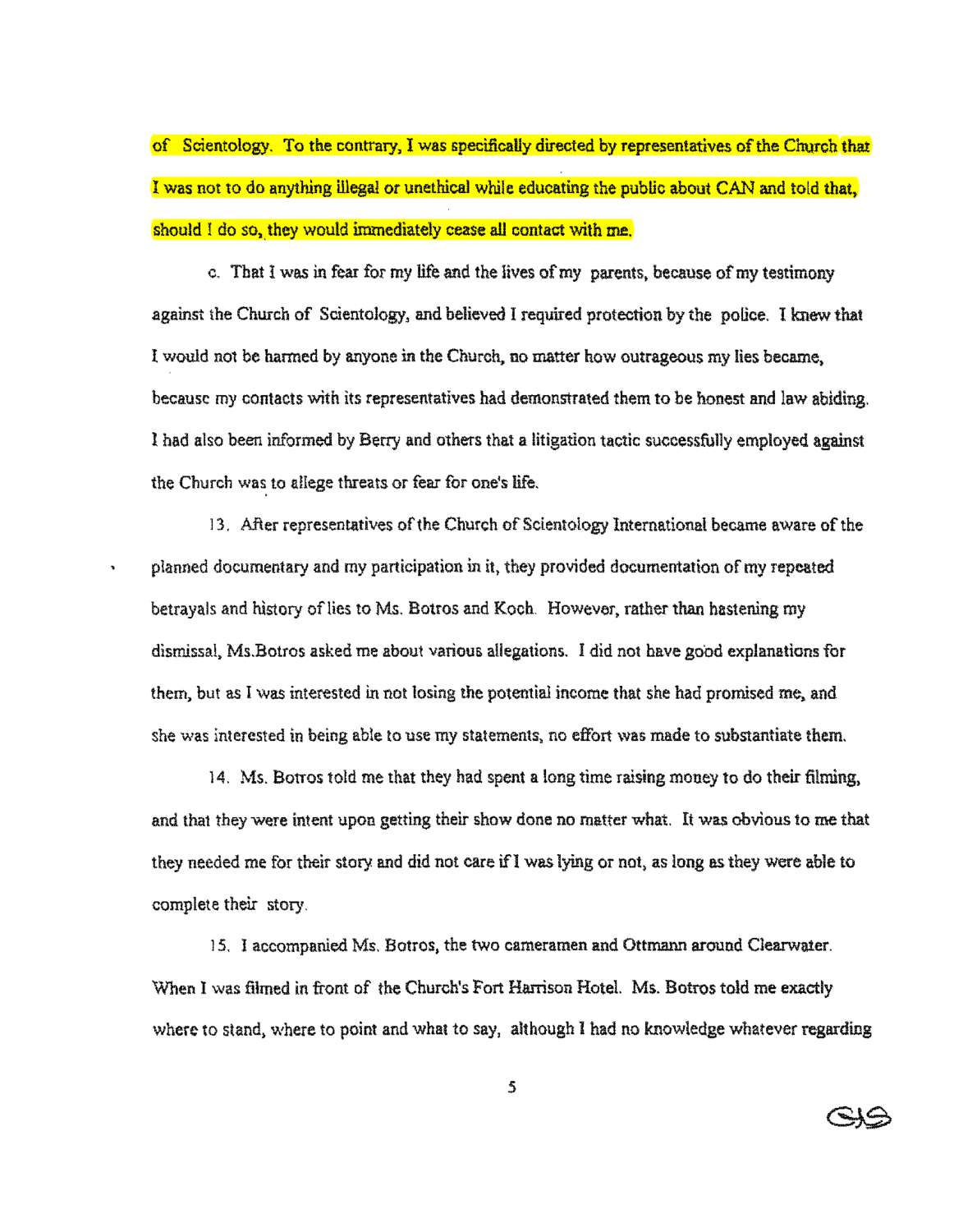 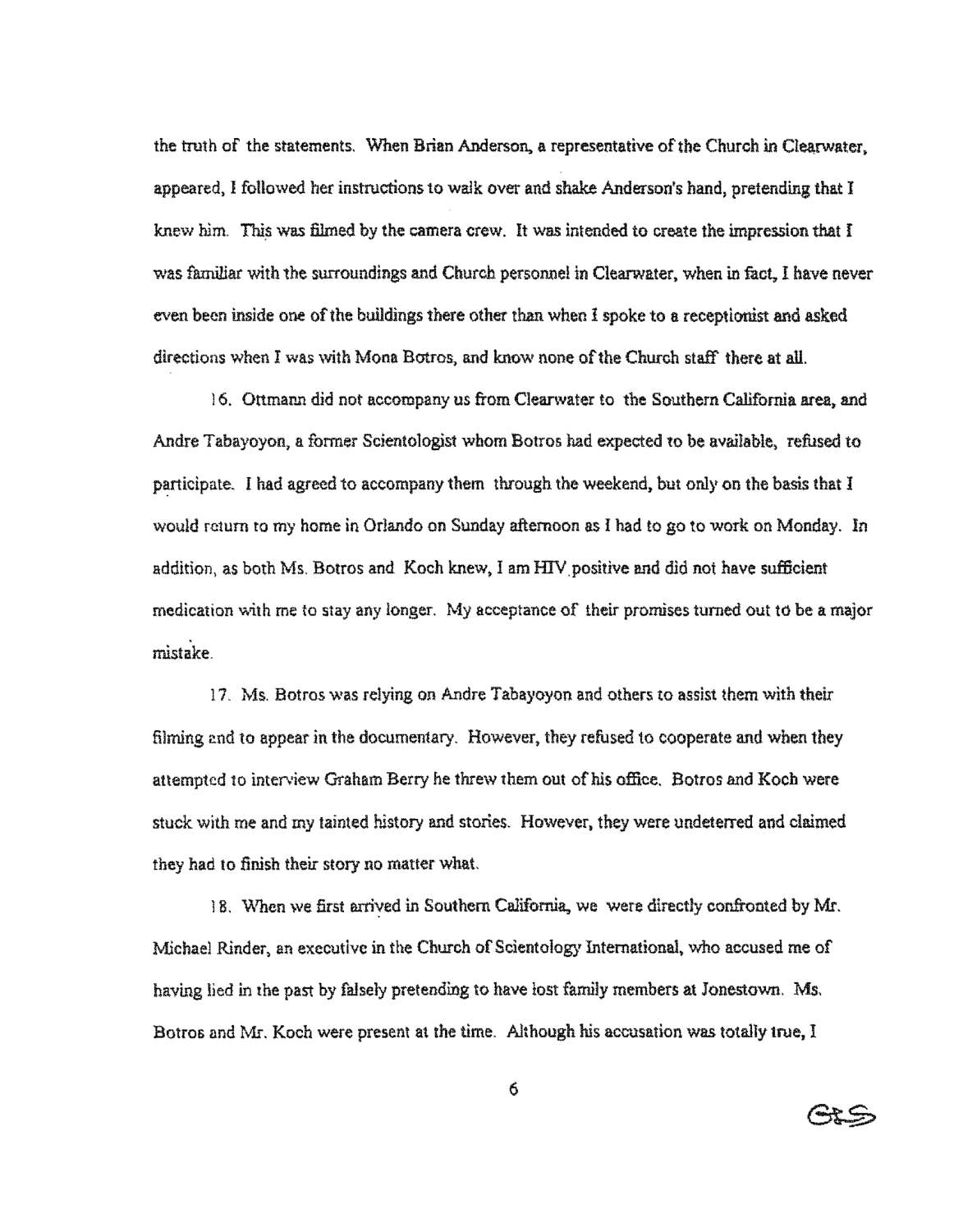 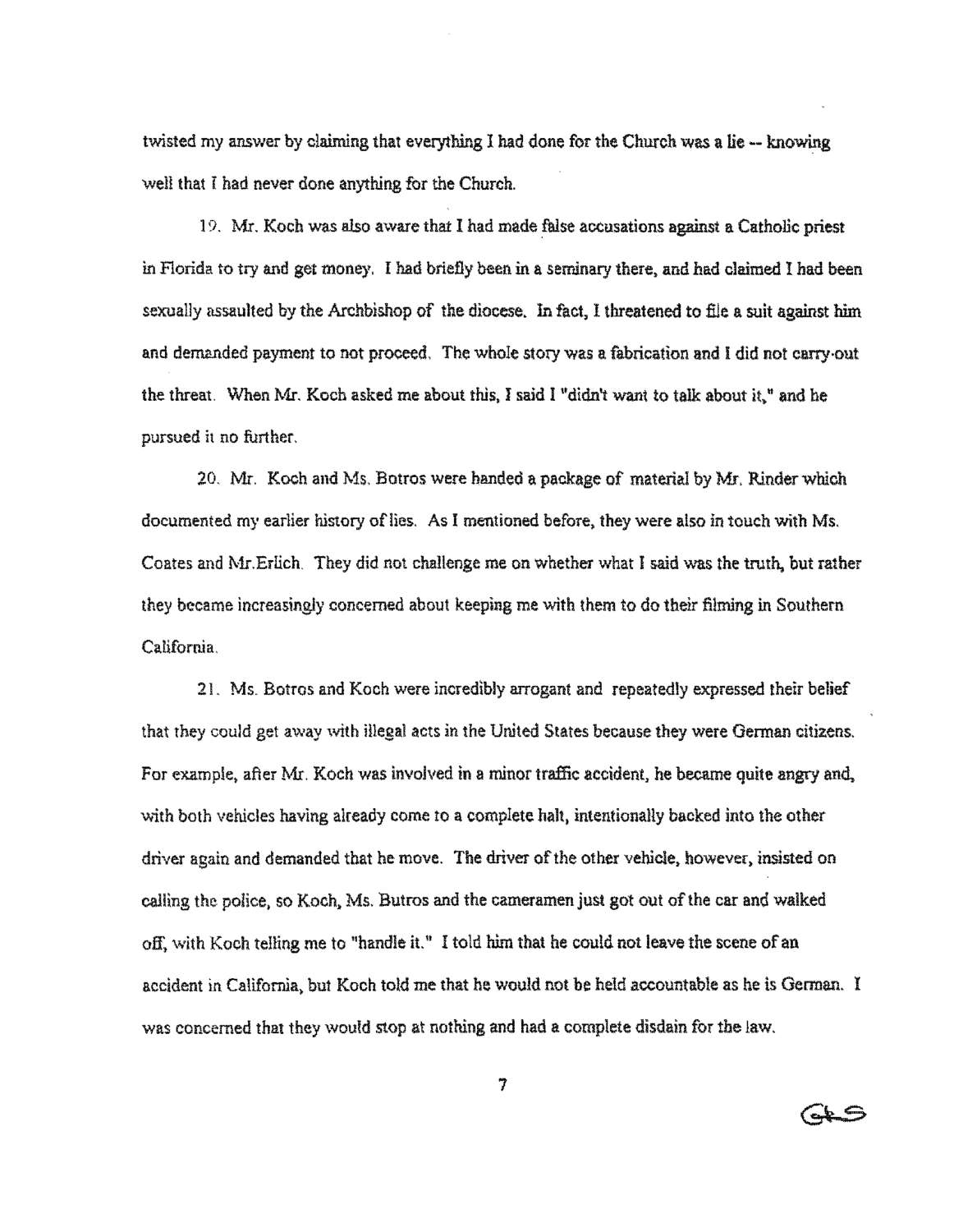 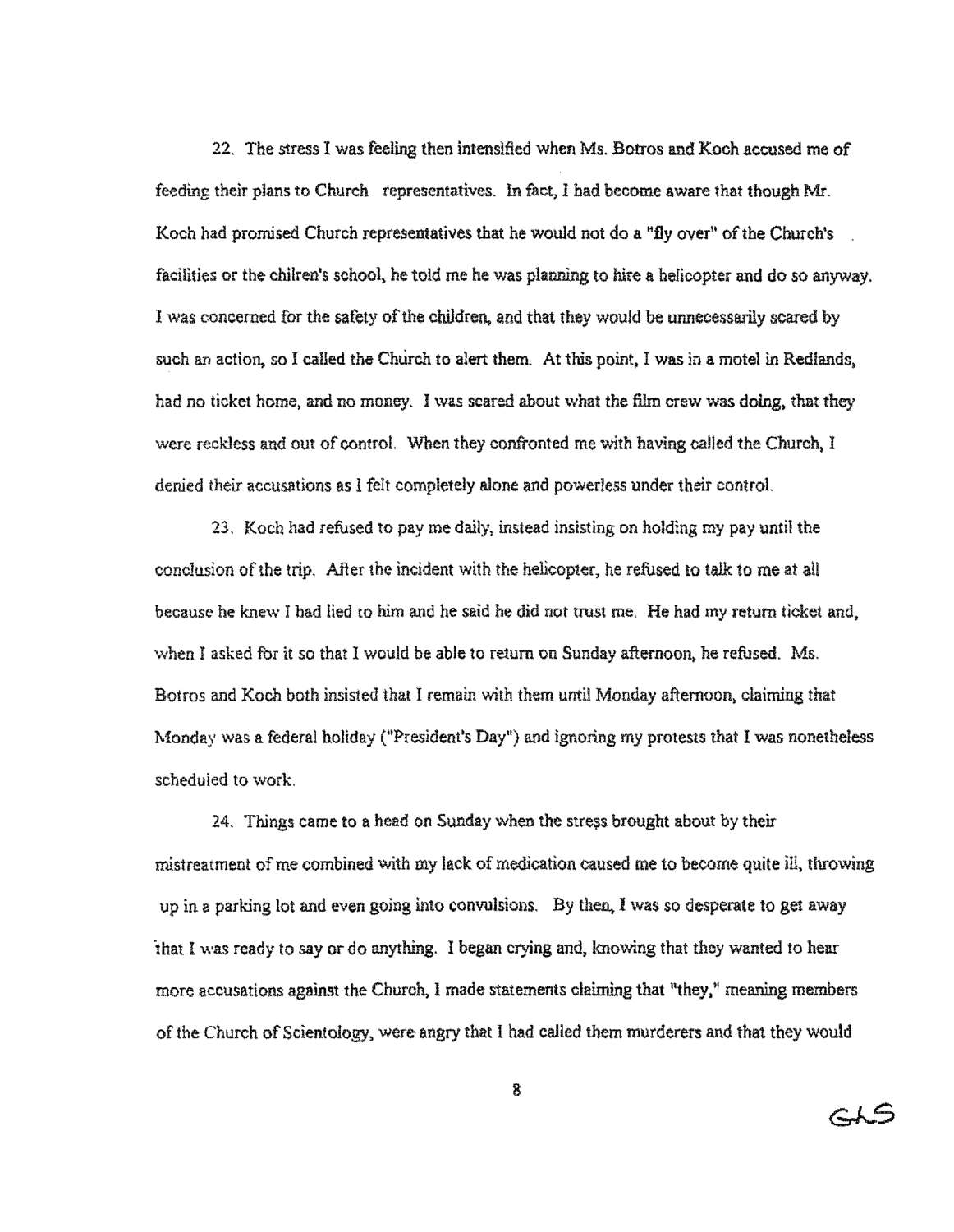 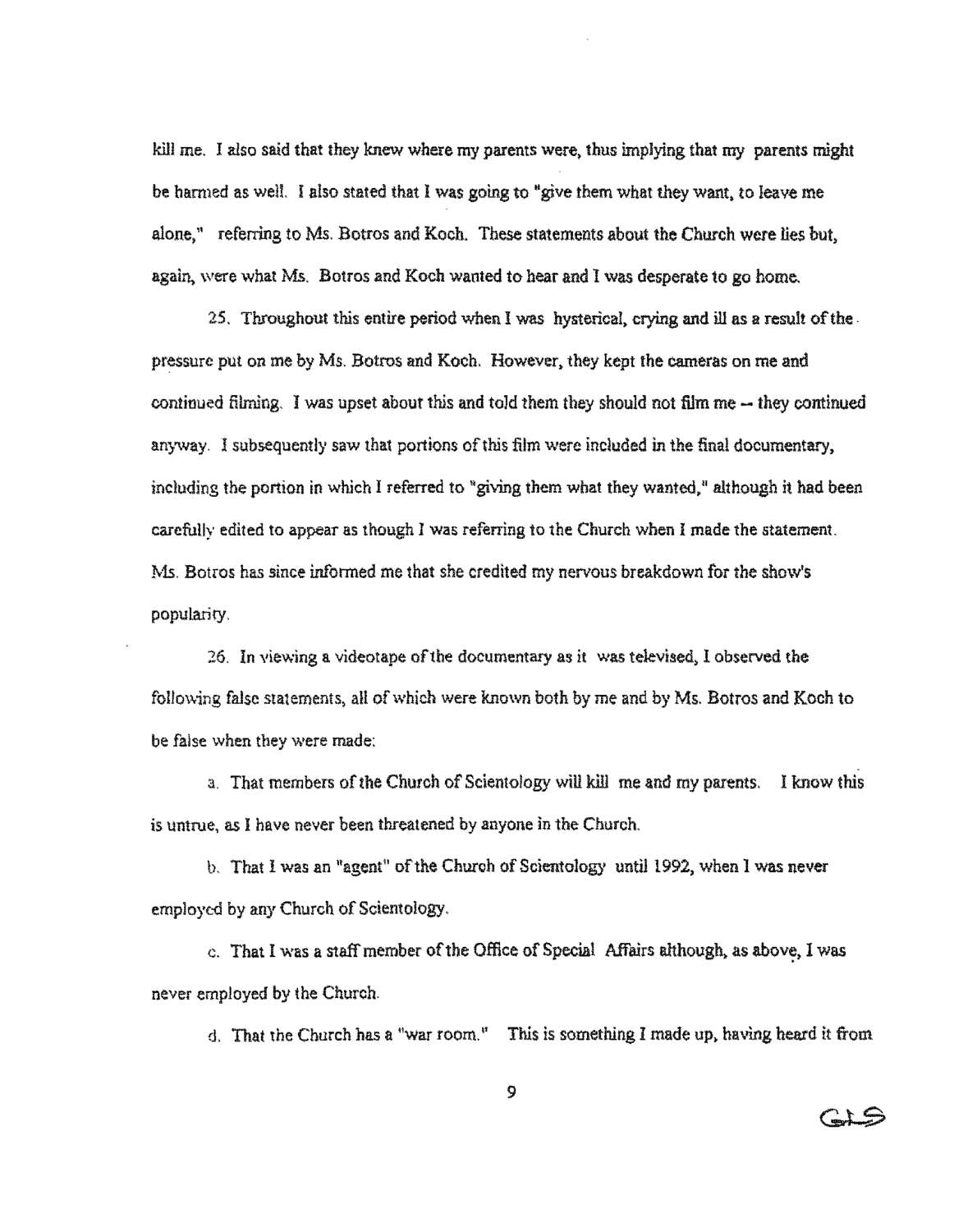 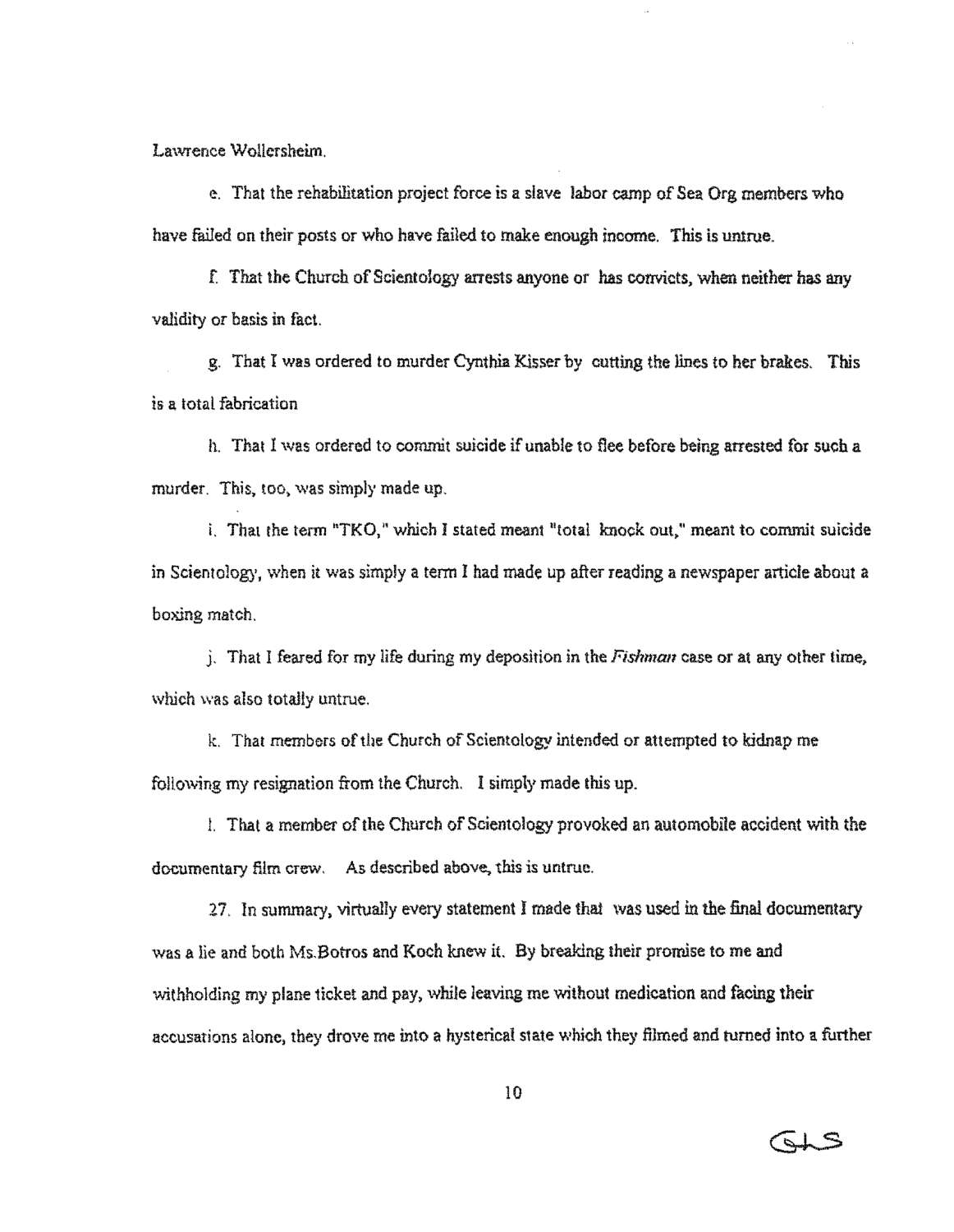 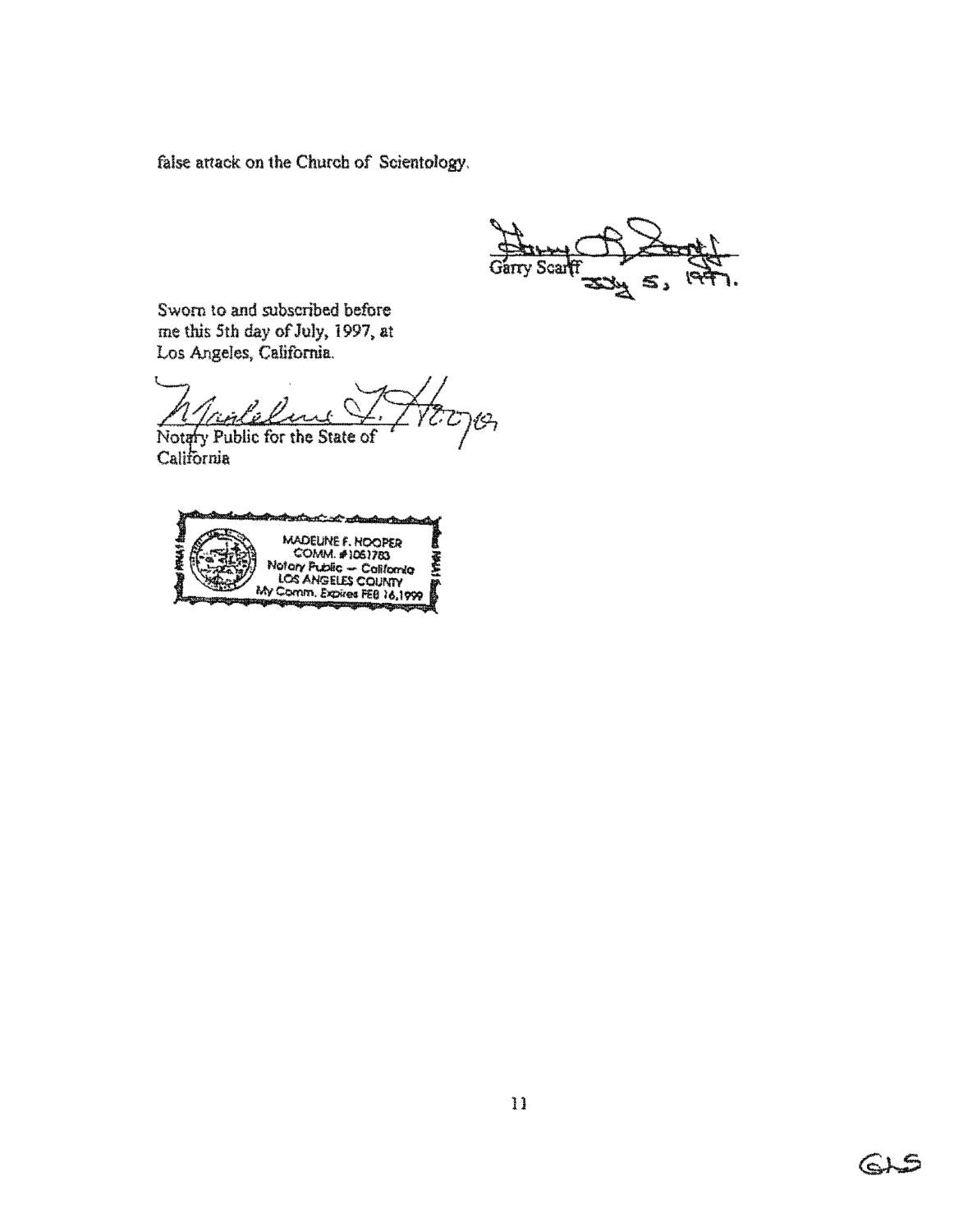