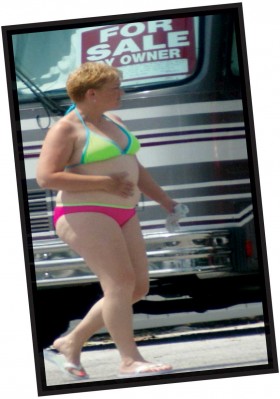 Needless to say, it was a convenient tagline and gave Cooper the license to drop the names of certain highly notable Scientologists. But in truth, Amy Scobee never played a significant role in running anything and was actually expelled from the Church for gross incompetence in 2005.

“I’ve falsely been representing myself for quite sometime now in order to appear competent so people would count on me or consider I was on their team.”

“My intentions and objectives have been to flirt, not be faithful... To keep a ‘not too tight marriage’ in case you might ever ‘need’ to step out of it.”
—Amy Scobee

To cite just a little of the substance therein:

Among other items in her autobiography, she claimed that: “I used to have horses,” when in fact, “I’ve never had a horse.”

Then again: “I’ve said a number of times I used to sing with a band. This isn’t true.”

While even more to the point here: Although she did indeed briefly serve the Church of Scientology Celebrity Centre in Los Angeles, she generally—and this, too, in her own words: “sat in the office for hours talking about this or that—diets, hair, all sorts of non-productive things.”

She is also dimly remembered for running with a certifiable conman who feigned an interest in Scientology to gain an “in” to luminaries attending services at Celebrity Centre. Scobee liked the man’s gifts, the nights about town, the lavish dinners and limousines. Hence, she used what influence she could muster to impede/divert an investigation of the man. Nonetheless, he was finally undone, expelled and banned from entering any Church of Scientology.

So no, Amy Scobee was hardly what Anderson Cooper suggested. Indeed, by the time Cooper tried to fob her off as some sort of “celebrity queen,” the woman hadn’t actually stepped foot in the Centre for more than 15 years.

She did, however, leave one little smudge in Celebrity Centre history: Having accomplished nothing of substance, she attempted to maintain her position by embarking on a potholed path of "establishing" new Celebrity Centres. The result was a “Centre” in Nashville, Tennessee, that was not only grossly inadequate, it was a downright hovel.

With Scobee long since removed, the hovel she cobbled together is also gone—replaced with a gleaming new Ideal Church of Scientology & Celebrity Centre Nashville to serve all those who call Music City, USA, their home. While just for good measure, on May 11 of this year, the Church's Celebrity Centre Nashville won a prestigious award from Nashville's Metro Historic Commission for the preservation of historic integrity at the Commission's 35th annual historic preservation ceremony.

Then again, and also for good measure, the similarly shabby Las Vegas center from Scobee’s watch has likewise been supplanted with a new Ideal Church—this one just a mile from the Las Vegas Strip. Its opening was likewise celebrated with coverage on all local news stations and Nevada’s largest newspaper.

But it’s Scobee’s history of extramarital affairs that finally proved her undoing. As she so delicately phrased it:

“My intentions and objectives have been to flirt, not be faithful...To keep a ‘not too tight marriage’ in case you might ever ‘need’ to step out of it.”

And step out of it she did—with the zeal of a marathon runner.

According to sworn affidavits presented to AC360, a then-married Scobee raced in pursuit of extramarital affairs on at least five occasions. Through the process, and bearing in mind she was then still a Sea Org member, she further committed one of the gravest offenses of Church ecclesiastical law.

That is, and again in her own delicate phraseology:

“I committed a severe violation of Church scriptures and engaged in an affair; in fact with the person whom I was supposedly helping… I was also this person’s auditor, and my actions were a serious violation of the Auditor’s Code, a sacred ethics code that governs the conduct of auditors.”

To which one might add, she violated said ethics code for the conduct of auditors in an auditing room, with her preclear, while “in session.”

All of which brings us to the real bottom line of Scobee’s appearance on AC360. In a word, it was Amy’s appointed role to corroborate a Marty Rathbun tale concerning the alleged abuse of Mike Rinder...

And, oh, how she played the part!

But what she did not bring to the AC360 stage was anything approximating the truth...

Which is to say: Amy Scobee knew a story involving Mike Rinder and abuse, all right. But he was abuser and she the victim.

To wit—and at last we come to a statement wherein she does not mince words:

“As I was sitting in my office, I heard Mike tell his junior that he was just a c**k sucker and continue to call him names.

“Then I heard a big crash and ran into the office. Mike was holding [a male person] against the wall when I got there. I told Mike to let go of him in a calm voice. Mike then came directly over to me, grabbed me by both arms and shoved me, which nearly knocked me down.”

Today, Scobee spends her days posting salacious drivel to cyberterrorists on the lunatic fringe of the Internet. Although she has thus far escaped hate-crime scrutiny, she remains among the nastiest snipers and her snippets are filled with sexual tittle-tattle.

So, yes, while Scobee may have never been a “celebrity queen,” she at least now qualifies as a gossip maven... in which capacity she met a welcome companion in Anderson Cooper.