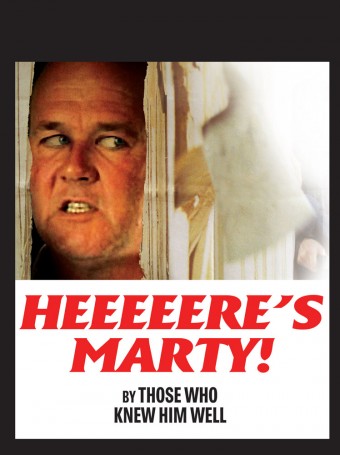 Marty Rathbun’s descent into the abyss of insanity was by no means a sudden, over-the-edge plunge. Rather, his was a slow and inexorable slide into the depths of irreversible irrationality.

For years Rathbun managed to keep the madness hidden. Even when the verbal tirades metastasized into violence, the outward signs were subtle. For by then his cleverness had grown all but demonic and what he unleashed was kept isolated and behind closed doors.

But by winter of 2004, the year of his desertion from the Church, he could no longer keep his malady veiled. The cunning was gone, the rage unchecked, and so it was that a whole host of co-workers finally bore witness to what Rathbun had become. That was the evening when all of them shockingly saw, and then promptly stopped, his attempt to kill Mike Rinder with his bare hands. (See The “Kinky” Relationship.)

The result was all too predictable: a spiral toward insanity like a headlong descent into a dark place that had always been waiting for his arrival.

It was the beginning of the end for both of them and would finally spawn another kind of madness altogether; for here were two former external affairs officers who had worked the same cases and walked the same beat. Now removed—and seemingly mortal enemies—they formed an unholy alliance.

And what makes them “best good buddies” today?

At the heart of it all lies the answer to that most haunting question: What possessed Marty Rathbun?

By way of a strangely relevant clue—because he is a very strange man—consider his two favorite films: The Shining (1980) and Scarface (1983). Both are dark, violent and laced with sadistic scenes.

The first, based on a chilling Stephen King novel, chronicles the slow-burn insanity of a writer (Jack Nicholson) in a snowbound resort hotel. As the writer spirals into lunacy, he wields an axe to kill his wife and young son. It’s a now-classic scene wherein Nicholson immortalized that pop culture refrain, HEEEEERE’S JOHNNY!

While in macabre imitation, Rathbun was forever announcing his arrival to fellow staff members with a chilling HEEEEERE’S MARTY!

Rathbun’s second favorite film, Scarface, is likewise immortalized in American pop culture. It tells of a Cuban petty criminal (Al Pacino) who lands in Miami as part of Castro’s infamous Mariel boatlift. The young thug builds a cocaine kingdom to rule a drug-addled world. But when a Colombian drug deal goes sour, the Cuban castaway is all alone on his baronial balcony to face a horde of hit men with a grenade-launching assault weapon. Out of his mind on cocaine, he cries, “Say hello to my little friend,” before unloading his last clip and collapsing in a hail of bullets. It was another of Rathbun’s favorite lines.

Yet beyond a glimpse into the mind of Marty Rathbun, both films stand as a harbinger of real-life things to come; for just as madness gripped the fictional characters he so emulated, so he himself was soon gripped.

It was 1993 when Rathbun suffered his first mental breakdown. Then a senior executive in legal affairs, his collapse came after a turbulent 15 years of federal and state investigations, lawsuits and civil actions from miscreants who had crawled out of the woodwork. For the rest of Scientology, it was a celebratory time. After all, that was the year the IRS had finally—under the guiding hand of ecclesiastical leader David Miscavige—cut through its own bureaucracy and fully recognized the Church of Scientology and all its related social betterment organizations as fully tax-exempt.

In October 1993, more than 10,000 Scientologists gathered in the Los Angeles Sports Arena to celebrate the victory. But in the world of Marty Rathbun, any such celebration was hollow; for this was the moment when he slowly came to realize the fighting would soon be finished and that he was forever doomed to become an aimless soldier without a war, perpetually peering around corridors for invisible enemies.

What then followed is almost as chilling as any sequence in the horror films he loved. There had been signs: moments of volcanic rage triggered for no reason anyone could fathom. But he allowed nothing to forewarn his wife and fellow staff members when he skulked away one morning in November of 1993, just weeks removed from the Church’s greatest victory. Rathbun eventually reappeared, and was granted a two-year sabbatical. (See Postcards from the Edge or Marty Takes a Holiday.)

On his return to staff in 1995, Rathbun held junior positions in a trainee capacity at the Church’s spiritual headquarters in Clearwater, Florida, then worked his way back into the external affairs arena. But unbeknownst to those around him, that small voice within continued calling out, Heeeeere’s Marty! Indeed, within weeks of his arrival to Clearwater, he had committed a crime that would not be discovered for 15 years and which would cause him to have a total mental meltdown. (See A Liar is a Coward; A Perjurer is a Criminal.)

By 2002, Rathbun’s mental state was steadily eroding by the day. His incompetence and malfeasance in external affairs were likewise back in full force. Accordingly, he was removed from any position of executive authority—that authority he was so practiced at worming his way into. In the wake of that removal, and in a rare moment of lucidity, he wrote of the fact he indeed possessed a “proclivity for creating some of the greatest catastrophes in Church history when allowed to have some leash.” (See A Brief Chronology of Monumental Disasters, The Career of “Kingpin” Rathbun.)

Then, too, by the end of 2003, and albeit only in isolated incidents, he was starting to betray that proclivity for madness. In one instance, he flew into a frenzied rage and flung a telephone into a wall. With no more external battles to fight, he soon found a new battleground—within the Church… And so the violence he unleashed against fellow staff became the final straw. In consequence, and although already stripped of all authority, he was formally dismissed from the Church organization he had served.

Thus his fate was sealed, for never again would he rise to any executive position or insert himself into the decision-making process. The result was all too predictable: a spiral toward insanity like a headlong descent into a dark place that had always been waiting for his arrival.

There was another key admission at this juncture. It is related by a Church executive as told to CNN and describes Rathbun as of 2003:

“Marty confided in me and told me that with all of the expansion now unfolding, he was a ‘fish out of water’ and didn’t know how to do anything related to Church expansion… Marty cried as he was telling me this and said all he could do is fight battles and that’s what he wanted to continue to do somehow, even though there were none… He was an extremely disturbed individual and further said in tears of grief that he had no creative or constructive capacity to hold due to his lack of competence and experience."

There was more, because also relayed to CNN was his confession to another Church executive—a confession wherein he admitted that he obviously had lost his sanity if only for the fact he could not stop bouncing his knee up and down.

But in the end, and even in the face of testimony from Rathbun’s former wife, a woman who so pointedly told Cooper: “Anybody in CNN who has met this person must have noticed the guy is a psychopath”...the anchorman kept to his own agenda.

That was when Cooper finally presented Rathbun with a gleeful HEEEEERE’S MARTY!