Keep in mind that the last time the Church's spokesperson talked with anyone from CNN about the show, Editorial Director Richard Griffiths agreed a “hard reset” was in order. Translation: Let's start the relationship over and see if we can make amends. Now it is clear that was a disingenuous discussion.

Not only did CNN and Cooper refuse to interview these Church executives, including the International Executive Director, but they weren’t even welcome to drop by CNN studios.

Here's the back story: That conversation came about after numerous frustrations the Church experienced with Cooper and his producers during their “investigation.” Here are just a few:

When Church executives repeatedly insisted on being interviewed, CNN refused to call them at their offices but would only speak to them if the executives were on a cell phone.

After Church officials denied that ridiculous demand, CNN refused to speak to them at all, never even responding to numerous voice mail messages.

Church executives then wrote to CNN. Despite more than a dozen letters, transmitted by both e-mail and FedEx, CNN never answered or acknowledged receipt of even one.

Next, CNN was contacted by Church counsel, whereupon the network begrudgingly agreed to interview Church executives. But Cooper had a precondition: The interview had to be in a hotel room.

It didn't matter. When the interview date arrived, in October, Cooper canceled due to that “inner ear bug.” He never attempted to reschedule.

For Cooper's choice of salaciousness over reality, watch the video Anderson Cooper's Definition of “An Investigation.” For his taste in the tabloid sound bite, no matter how outrageous, watch the video A Worker’s Paradise “Slave Camp.” And finally, in full evidence of the journalistic maxim that “pictures don't lie” and proof of Cooper's willful avoidance of the truth, watch the video A “Beating Every Day” While 10,000 Miles Away.

Well, nothing is too outrageous for AC360, because Cooper, his producers and even CNN Corporate saw exploiting the popularity of Scientology as a quick fix to their ratings debacle. But it didn't even work. Throughout the five nights, ratings continued their inexorable plummet. The public knows when they've been duped. Even the most casual viewer couldn't help but notice the same outrageous, unsubstantiated sound bites played over and over and over, while the program CNN titled “Scientology” never showed a single second of the Church.

So that's all AC360 was about. An attempted quick fix to their ratings plunge. Too bad they didn't accept the Church's offer to go inside. That would have at least been news. But CNN is no longer the “most trusted name in news”; it seems they've left the profession entirely. Their ship is sinking and can't be saved. Now it's clear why. 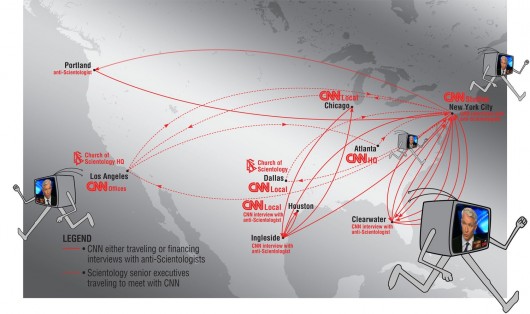