Mike Rinder:
Turning to the Dark Side 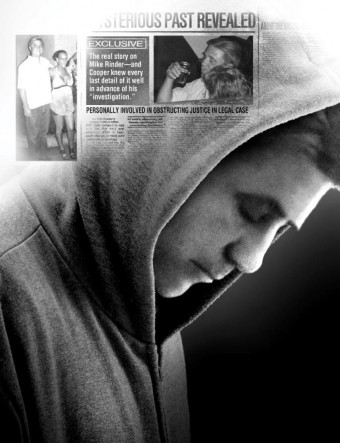 Moreover, everyone who crossed his path knew it... particularly inquiring reporters whom he treated with a slick insincerity that all but the dumbest immediately recognized.

Consequently and invariably, Rinder’s track record as an external affairs officer charged with press relations looks like this...

He spends four days needling a magazine reporter—challenging the man, goading him, providing only perfunctory answers to questions. The resultant article does both the Church and magazine a disfavor. (A reporter from yet another publication describes the piece as: “written in classic conspiracy-theory fashion, full of vague, threat-filled innuendo.”)

A German TV crew lands in Los Angeles to film Church activities for a broadcast segment. Of course, German reporters tend to toe a party line as drawn by anti-religionists in general and anti-Scientologists in particular. But Rinder treats it like the Battle of the Bulge, replete with hostile confrontations, a car chase and even a fender bender. The resultant segment is not what one might call “balanced.”

Rinder teams up with none other than Marty Rathbun to facilitate a national network interview with a senior Church official. The duo proceeds to do what they do best: badger, bully and coerce all concerned. The resultant interview is barely coherent and even an otherwise obliging network host exclaims: “What the heck was that all about?”

Rinder receives queries from an Eastern European publication. But inasmuch as he regards everything east of the Danube as beneath him, he doesn’t give them the time of day. Reporters sense it and respond accordingly—say no more.

In the end, however, he does come to recognize the error of his ways, and proceeds to majorly suck up to reporters. Indeed, so conscientiously does he suck up that he misses a call from a national magazine… and that one he doesn’t return for five months!

No longer does a newspaper call go unheeded for months at a time. On the contrary, when a media outlet is on the line, Rinder now answers on the first ring and he's prepped and ready to go.

Because having opened his bulging Rolodex of media contacts, he’s now spreading a campaign of hatred to the very same people he so contemptuously dismissed and evaded while working for the Church. And, yes, he’s quick to answer the call when reporters come snooping around.

While as for CNN and the S. P. Times—he’s got them on speed-dial.