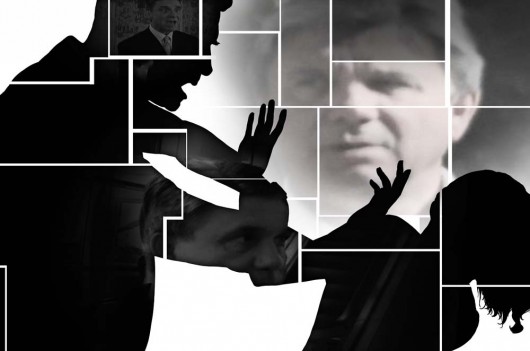 “I am afraid of my potential for destruction.” —Mike Rinder

And so he should have been afraid. For so intense and vicious is Rinder’s hatred for anyone associated with Scientology that it ultimately destroyed every meaningful relationship he ever had… beginning with the family he abandoned for the fact they remain Scientologists.

Here’s the unvarnished story on that most unforgiving and reprehensible aspect of Rinder’s hate-driven character, with a few pointed highlights for starters:

Rinder, 55, was born in Australia. His parents became Scientologists in 1960 and were recognized as Founding Scientologists in the land Down Under in the late ‘60s. His mother, brother and sister remain active, engaged and committed Scientologists.
For so intense and vicious is Rinder’s hatred for anyone associated with Scientology that it ultimately destroyed every meaningful relationship he ever had…

In 1973, after attending high schools in Australia and England, Rinder worked for his now-deceased father in the wholesale grocery business. That same year, he joined the Church’s religious order, the Sea Organization, in Australia. Three years later, in 1976, he married 20-year-old Cathy Bernardini, another Sea Organization member.

In 2007, after severing all ties with his Church, Rinder abruptly and callously abandoned his wife of more than 30 years and their children, one of whom would subsequently wage an excruciating war against cancer. As his wife Cathy Bernardini tells it in a sworn affidavit to CNN:

“In April 2009, I went to see Mike in Denver, but he didn’t want to see me. I tried to get in communication so he could be informed of family matters such as [our son’s] illness, but he adamantly did not want to talk to me or see me, so I flew back to L.A.”

At this point, one might reasonably ask: What kind of father would do such a thing? And how could he live with himself?

For Rinder, however, it was just another dismal act in a well-practiced melodrama of his so-called life.

The story of his family in Australia is especially ironic, inasmuch as many years ago what amounted to a Mike Rinder “prototype” precipitated a short-lived prejudicial and unconstitutional ban on practicing Scientology in the Australian state of Victoria. Accordingly, the Rinder family lore includes many a story of secreting L. Ron Hubbard books beneath floorboards lest authorities raid the home, and the family triumphantly fighting to overturn the illegal ban.

Even more to the point, a Policy Letter by L. Ron Hubbard enumerating suppressive acts against Scientology and Scientologists was originally issued in the wake of that ban. And, indeed, that Policy Letter cites the very same acts Mike Rinder is perpetrating today, including:

“Being at the hire of anti-Scientology groups or persons.”

“Receiving money, favors or encouragement to suppress Scientology or Scientologists.”

And, “Seeking to splinter off an area of Scientology and deny it to properly constituted authority for personal profit, personal power or ‘to save the organization from the higher officers of Scientology.’”

It was certainly not for nothing, then, that 79-year-old Barbara Rinder penned this to her son Mike in a painstaking hand that betrays her age and maternal wisdom:

“Michael, you are destroying everything that I am and I have been trying to achieve for the personal freedom for all family members since 1961. I need a promise from you to desist from these actions.

“It is important for me to know that this situation is handled promptly, because there is not a lot of mileage left in this body. I feel I must get it totally understood that I will not tolerate your enemy actions, and I must insist you stop.”

Beyond that, the letter contains nothing even vaguely antagonizing and closes with a simple “Your mother, Barbara.”

For all intents and purposes, however, he has indeed betrayed everything his mother is and all she worked to achieve. While if only to cap it with the height of bad taste, he soon took up with another rancorous anti-Scientologist, Christie Collbran, a woman young enough to be his daughter and someone else who shattered the hearts of her parents. (See Mike Rinder’s Live-in Media Puppet, Christie Collbran.)

All came to an ugly head on April 14, 2010, when Rinder and three cohorts appeared at the front door of the Fort Harrison, the Church’s religious retreat in Clearwater. They came lugging video and sound recording equipment, akin to an ad hoc news crew.

Their ostensible purpose? Rinder claims he finally wanted to speak with his 27-year-old son, a Sea Org member who had just recovered from a three-year fight against a life-threatening form of cancer.

When an officer finally speaks with Rinder’s son, the young man categorically states that he does not wish to see his father—paternally born again or otherwise.

Rinder had known of his son’s illness for a full year. Not from his wife, of course, since he refused to speak with her, but through a subsequent conversation with a newspaper editor to whom he had been dishing out one or another version of his story.

That the eventual recovery of the young man was only made possible because the Church and its leader enlisted the world’s foremost specialist in malignant melanoma makes this chapter of Rinder’s life even uglier—not to mention ironic. While if only to cap that one with yet another lesson in bad taste: For months Rinder had lived but a 25-minute drive from his son and yet never once bothered to inquire about his health, let alone attempt to see him.

All of this, in addition to having ignored the boy for more than 20 years, was irrelevant to Rinder. He now wished to play the conscientious father, albeit one who is chauffeured by a girlfriend (Collbran) not much older than his son, and one who brings along a “bodyguard” (Rathbun). To top it off, he planned to videotape the whole “tearful” reunion and flog it to some other tabloid.

Predictably, if disappointingly for the now “Born Again Dad,” Rinder’s performance is a dismal flop. He is met by Church officials and police officers, the latter none too pleased that Rinder and Rathbun are begging for a fight. Moreover, when an officer finally speaks with Rinder’s son, the young man categorically states that he does not wish to see his father—paternally born again or otherwise.

Rinder, in turn, takes the news with all the emotional response one would naturally expect from a “loving father” when his son denies him: He turns to the camera and exclaims:

“You can stop saying I don’t want to see my kid, because now I’ve proven you won’t let me see my kid!” (While adding that it’s “all documented” on video “for the BBC”—for whom it is reported Rinder has negotiated a six-figure deal to tell the “truth” about his former Church, friends, and, obviously, his family.)

All present—save for Rathbun—are entirely nonplussed that anyone, even Rinder, would so bluntly and blatantly lie about the Church “preventing” him from seeing his son. Moreover, Rinder wasn’t even remotely bothered that his son refused to see him, owing to the hatred he elicits for the Church to which his son and entire family are dedicated. But, of course, for Rinder it was never about his son; it was about the media, always the media. (For the record, when Rinder and gang are finally cited for loitering and prowling, they all knowingly provided the police with false home addresses.)

Rinder wasn’t even remotely bothered that his son refused to see him, owing to the hatred he elicits for the Church to which his son and entire family are dedicated. But, of course, for Rinder it was never about his son; it was about the media, always the media.There is substantially more and it all but puts the final nail in the coffin of Rinder’s unhinged mental state and hastens his Kafkaesque metamorphosis into oblivion.

Shortly after the Rinder/Rathbun/Collbran attempted ambush of Rinder’s son, wherein Rinder claimed the Church wouldn’t “allow” him to “see his family,” Rinder’s Scientologist brother Andrew flew from Melbourne, Australia, a journey of more than 10,000 miles, to do just that—see his brother. On landing in Florida, he meets up with Rinder’s wife, Cathy Bernardini, and Rinder’s own daughter, who have traveled from Los Angeles. The family members eventually find Rinder outside a doctor’s office in Clearwater where he has taken Collbran for acupuncture treatment. He is standing on the sidewalk, merrily chatting on his mobile phone. When he sees his brother, wife and daughter approaching, he instantly goes into shock. In point of fact—and this after not seeing his brother, wife and daughter in years— he tells his family that it’s the press on the other end of his phone, and that he’s talking to the press about them.

After which, and shockingly so, he hangs up and then speed-dials the local police to make a complaint that his family is “trying to see him.”

At which point the encounter devolves into a genuinely violent confrontation, as Rinder grabs hold of his wife’s arms in a vice-like grip—causing lacerations which bled so much that paramedics were called to come and give her first aid.

She said of that day in Clearwater, “Mike’s hands were gripping my arms so tightly I could feel his fingers actually digging into my bones.” After he finally let her go, she tried to show him the damage he had done. His response was characteristically Rinder, the anti-family man: “I don’t care, you f***ing bitch!”

For whatever reason, perhaps humility, Andrew Rinder did not mention to the paramedics that his own finger was nearly broken by his brother in the attack.

Needless to say, the “loving” father who had tried to ambush his son days earlier, now contemptuously rejects his own daughter when she does try to talk to him.

“Mike’s hands were gripping my arms so tightly I could feel his fingers actually digging into my bones.” After he finally let her go, she tried to show him the damage he had done. His response was characteristically Rinder, the anti-family man: “I don’t care, you f***ing bitch!”
After the incident, Andrew Rinder boards a return plane to Australia, which leaves him another 24 hours of flight time back to the other side of the world to ponder why his brother is “behaving eccentrically and violently and refusing to communicate with us.”

Meanwhile, Mike Rinder couldn’t care less. Except to make his next call wherein he spins a wild version of the episode to the local tabloid. The theme, as always, makes him the “victim.” And his wife? Somehow, she “got injured.” Calls to the paper inquiring whether Rinder was paid for his story have not been returned.

Bernardini was no match for her beefy husband, whose hands, she says, are “twice as big as mine.” Weeks after the incident, her left forearm still showed blotchy red abrasions turning black and blue, and her right forearm, heavily bandaged, showed red-clawed flesh that a specialist said would take several months to heal.

Today, Mike Rinder’s metamorphosis is complete: from mental instability to full-blown lunacy and physical violence. And it’s now directed at all Scientologists—even his own family.

As for Rinder’s denial to law enforcement and the press that the harm to his wife, Cathy, had been caused by him—corroboration came from an independent source. For it seems that forcefully grabbing the arms of women is a standard part of his behavior. Then again, lying about it, and coaching others to corroborate his lies, is another daily routine. (See Rinder: The Lady-Killer.)